In an update to fans, Everton’s stadium development director Colin Chong says there will now be another 28-day public consultation on the changes to the arena. Tony McDonough reports

Everton FC is to launch another public consultation on its plans for a £500m new stadium in Liverpool’s northern docklands.

The club has already carried out an extensive public consultation of its plans for a new arena in Bramley Moore Dock within Liverpool Waters and submitted a planning application to the city council earlier this year.

However, in a update to fans, Colin Chong, Everton’s stadium development director, says that following feedback from the initial consultation, some modifications have been made to the original plan. This includes a reduction in the overall height of the structure to comply with World Heritage site guidelines

This will not mean the club will have to submit a new planning application but it will mean there will be another formal statutory consultation period of 28 days before the council planning committee makes a decision. It is like the committee will hold a special one-off meeting, probably in December, given the size of the project.

Mr Chong said: “As you will be aware, the scale and detail of the planning application for Bramley-Moore Dock makes it one of the largest our local authority has ever received.

“Over the past few months, Liverpool City Council’s planning department has been consulting on the applications with the Liverpool public, as well as neighbouring authorities, emergency services, heritage and environment organisations and other regional and national stakeholders. 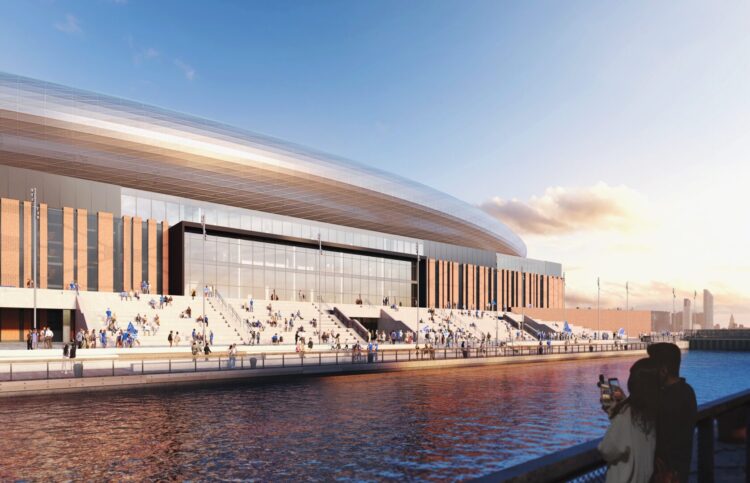 “As part of this process – and to address some of the feedback from consultees – we have been working with the Council and other agencies to amend some elements of the designs that were originally consulted on and submitted as part of our application. These updated designs will be formally submitted to the council in early September.”

The new design centres around the West Stand (the stand facing the River Mersey). The club has introduced a new river-facing stepped plaza and removed the multi-storey car park, which helps with the symmetry of the stadium and brings back river views for supporters in the West Stand and from the top of the stepped plaza.

As well as enhancing symmetry and general aesthetics, this new stepped plaza creates a covered fan area which protects supporters and the turnstile and lounge entrances from any inclement weather.

Solar panels proposed for the West Quay will now be relocated to the stadium roof and the brick facade has been simplified. Exposed areas of the stand will now have better cover and the overall height of the structure has been reduced to comply with World Heritage site guidelines.

Mr Chong added people would have a full opportunity to offer their views on the changes, and added: “This additional local consultation, together with some aspects of the project relating to third parties having slowed slightly due to the impact of COVID-19, means that – subject to planning approval and finalising our funding packages – it is most likely that work could commence on-site early in 2021.

“As there are currently so many factors over which we do not have direct control, it would be unwise to commit to a specific date when our build will commence – or when we are likely to be playing in the new stadium. However, we have every confidence in our project plan and the team we have assembled to deliver it.”

Ships on the Mersey and high and low tides on Thursday, August 27

Have your say on £19.2m plans for Merseyside town