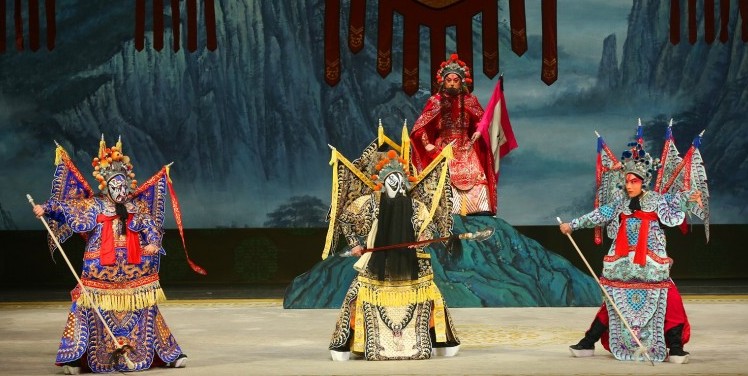 Ten years after their last visit to the UK in 2005, the magnificent China National Peking Opera Company returns to the UK for a limited two venue tour set to include a visit to Liverpool’s Echo Arena from 13th – 15th November.

China National Peking Opera Company will be performing two masterpieces for UK audiences: Warrior Women of Yang and the full-length European premiere of Farewell My Concubine. This is a rare opportunity to catch the fine art of Peking Opera on the UK stage from one of China’s most pre-eminent performing companies with two of its legendary stars Yu Kuizhi and Li Shengsu.

This is an exceptional opportunity to be immersed in the intriguing art of Peking Opera and take a cultural adventure into Chinese traditional artistic heritage from this world-class company. The magnificent costumes and the artful combination of dance, mime, music, and theatre provide a source of wonder for audiences of all ages; all part of China National Peking Opera Company’s charm.

“Elaborately choreographed… an epic charmer”
Jan Parry, The Observer (on Legend of the White Snake, 2005)

The rarely seen spectacular Warrior Women of Yang is a story of grief, courage, patriotism and family loyalty. A cast of over fifty will mesmerise you with music, song, mime, exquisite costumes and painted faces whilst they amazing the audience with stage combat and acrobatics.

“It remains for me one of the most thrilling, most penetratingly true of theatrical experiences.”
Clement Crisp, Financial Times (on Legend of the White Snake, 2005)

Farewell My Concubine is a renowned classical piece, a beautiful and harrowing story of political unrest, love, sacrifice and honour. It’s hard not to be entranced by this immense love story and the consequences of lost battles and pride.

In the climate of a largely westernised China, there are still artists who are passionate about the traditional form of Chinese artistic heritage and devote their lives to preserving the century old form of art. The artists from National Peking Opera Company continue to pursuit their dream of keeping this ancient Chinese art form alive and sharing its beauty and stagecraft with the world.

“With respect and honour, we are taking the opportunity of 2015 UK and China Cultural Exchange Year to present this fine, traditional art form of Peking Opera to the world to demonstrate that China is not just about what they can manufacture, but also about what they can perform.

“We sincerely hope the British audience will appreciate and be inspired by the master pieces that the National Peking Opera Company are to bring to the UK.”

The two astonishing masterpieces steeped in tradition will provide a thrilling theatrical experience not to be missed.