Liverpool is gearing up for another weekend of maritime spectacles as one of the city’s most popular annual events returns. 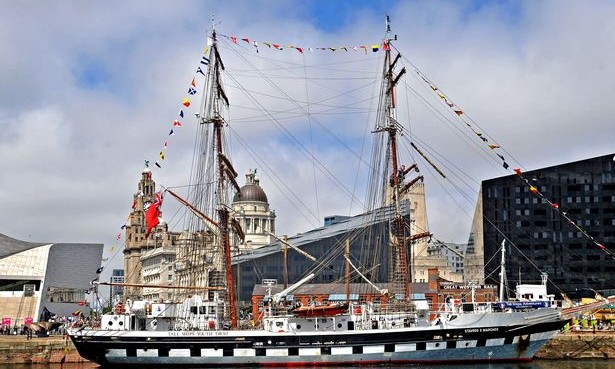 Liverpool’s waterfront will be awash with ships, stages and activities to suit all ages. Some of the weekend highlights include tall Ships, yachts and canal boats – many of which will be open to the public to explore; the return of the Royal Navy and Royal Marines Village to Graving Docks which includes helicopters, recruitment vehicles and diving tanks and unarmed combat and weapons displays;the International Canoe Polo Tournament and much more.

On top of the usual activities, Liverpool will also play host to the first ever Northern Boat Show with a stunning line-up of power boats, cruisers, narrow boats and sail boats exhibited featuring some of the biggest and most popular brands in the marine world. The land-based part of the exhibition is free to all visitors but there will be a £5 entrance fee for the pontoon access. Tickets are available at www.northernboatshow.co.uk or from the Tourist Information Centre located at the Albert Dock.

And of course Music on the Waterfront which this year is working in partnership with Albert Dock Liverpool, is back and bigger than ever with three stages – the main stage at the Pier Head, the Making Waves stage at the Mann Island Basin and the Hartley Quay Stage on board Tall Ship Morgenster.

The weekend of music kicks off on Friday as the city plays host to the first BBC Music Day. The Main Stage will see BBC Radio 6Music DJ Craig Charles bring his trunk of funk back to the waterfront with live music starting from 4pm and running until 11pm. Craig will be joined by special guests throughout the set.

Saturday’s Main Stage, from 1-8pm, is hosted by Smooth Radio and includes acts such as Collabro, Sam Bailey and a special appearance by David Gest and Kym Marsh. Ian Prowse will take to the Tall Ship stage and popular Liverpool Signing Choir will perform at Mann Island Basin.

Bay TV’s Jay Hynd and Ellie Phillips will host Sunday’s Main Stage from midday to 7pm, and will provide the perfect lazy Sunday afternoon sound track. With ‘Home Grown’ as the theme Rebecca Ferguson, The Hummingbirds and KOF are just some of the acts set to wow the crowd. Mezzo-soprano Danielle Thomas and the Royal Marine Band of Scotland will perform on the other stages which will see acts on there from midday to 5pm on Saturday and Sunday.

For full details of the programme, visit www.liverpoolonthewaterfront.co.uk.

“It’s been a busy couple of weeks for our World Heritage Waterfront and we’re still riding high on the massive success of the Three Cunard Queens weekend, so it feels like great timing for yet another maritime celebration!

“We know there is a real appetite for events which have a focus on the River, and once again we expect tens of thousands of visitors to spend time at the Pier Head and the Albert Dock making the most of the free activities on offer.

“This year’s event is going to be kicked off in fantastic style as Liverpool is the host city for the first BBC Music Day and there’s a real buzz around seeing Craig Charles perform once again in front of a home crowd.

“It’s clichéd, but there really is something for everyone across the three days and I encourage as many people as possible to come along and experience this fantastic event for themselves.”

This year’s International Mersey River Festival forms part of One Magnificent City, a seven week programme of activities celebrating Liverpool’s internationally renowned maritime history and transatlantic links. It began on Friday 15 May with the cultural celebration that is LightNight and will run until the weekend of the 4th July when Liverpool will host the UK’s biggest Independence Day celebrations under the banner Transatlantic 175.  Throughout the seven weeks various activities will be held which mark the 175th anniversary of Cunard.