Everton FC’s proposed new 52,000-seater arena is due to open in time for the 2023-24 Premier League season and a detailed planning application has now been submitted. Tony McDonough reports

Everton FC has released images and a video fly-through of the final designs of its proposed £500m stadium in Liverpool’s northern docklands.

To be located in Bramley Moore Dock, within Peel’s Liverpool Waters development, the 52,000-seater arena is due to open in time for the 2023-24 Premier League season. The club has now submitted a detailed planning application to Liverpool City Council.

The stadium forms part of The Peoples’ Project which also includes a community-led scheme for the area around Everton’s current Goodison Park stadium in the Walton district of Liverpool.

Click here to view the fly-through video of the stadium

According to a study commissioned by the club, the stadium project would have a transformational impact on north Liverpool, kick-starting the regeneration of the northern docklands, contributing a £1bn boost to the city region’s economy, creating up to 15,000 jobs and attracting 1.4m visitors to the city each year.

At the heart of the proposal is a brick, steel and glass stadium which takes its inspiration from the historic maritime and warehouse buildings nearby. The stadium structure combines the historic and the modern, with the brick base incorporating a subtle nod to Goodison Park’s famous Archibald Leitch lattice work, while the dynamic roof structure made from steel and glass gives the stadium a modern finish.

Following analysis of the feedback received through the club’s record-breaking public consultation, and a range of detailed technical assessments, the stadium designs have evolved.

The multi-storey car park has been relocated from its previous waterfront location and integrated within the stadium to create one impressive standalone structure, while additional environmental measures, including wind baffles, have been incorporated in the final proposals. 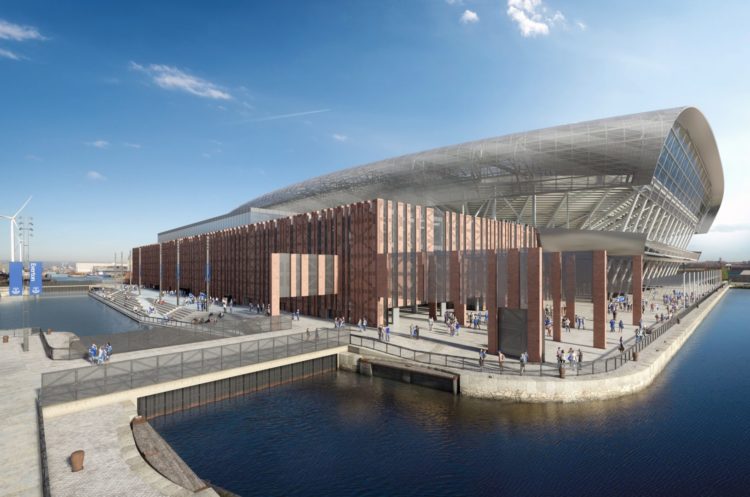 The plans also include extensive public spaces for use on both matchdays and non-matchdays featuring a Fan Plaza to the east of the stadium which will provide a focus for pre and post-match entertainment and activity.

This would see Everton’s home for 127 years redeveloped to provide a range of community assets in Liverpool 4, including high quality, affordable housing, a multi-purpose health centre, community-led retail and leisure spaces and a youth enterprise zone.

Professor Denise Barrett-Baxendale, chief executive of Everton FC, said: “This is a huge milestone in the Club’s history but also a profound statement of intent for our future. It marks the culmination of many years of work that has combined the passion of our fans with world class design and a commitment to creating something truly special on Liverpool’s waterfront.

“The stadium at Bramley-Moore Dock will deliver the best possible matchday experience for our fans, new facilities for cultural events and a building that will be a stunning new addition to Liverpool’s built environment.

Our proposals are a commitment to a long and exciting future for the club in north Liverpool, and also for our award-winning charity, Everton in the Community, to continue to make a life-changing difference in Liverpool 4.”

Ships on the Mersey and high and low tides on Monday, December 23

Ships on the Mersey and high and low tides on Tuesday, December 24

Liverpool Airport takes on a trio of apprentices