‘Bloomin good wifi’ and 50% more capacity as Merseyrail shows off a replica of one of its new £460m train fleet which is due to come into service in 2020. Tony McDonough reports

Merseyrail and Merseytravel have unveiled a replica model of one of their new £460m train fleet with 50% more passenger capacity.

And David Powell, programme director for the new fleet at Merseytravel, insisted the new “would not be cattle trucks”, in a reference to the current overcrowding that currently occurs on the network at peak times.

Constructed in kit form and made out of MDF, the remarkably lifelike replica carriage was unveiled to the media at a warehouse in Liverpool’s northern docklands. It will go on display to the public later in the autumn.

Mr Powell said the new trains, which are due to come into operation in 2020, would offer 50% more capacity. Currently a three-carriage Merseyrail train has a maximum capacity for 303 people.

Platforms across the network will be upgraded to handle the new trains with a staged programme of closures announced a few weeks ago. Top of the agenda was to minimise the risk of previous tragedies where passengers had fallen into the gap between train and platform.

They will also allow easier access for wheelchairs with a step that will slide out automatically. Currently, staff have to bring out a ramp. 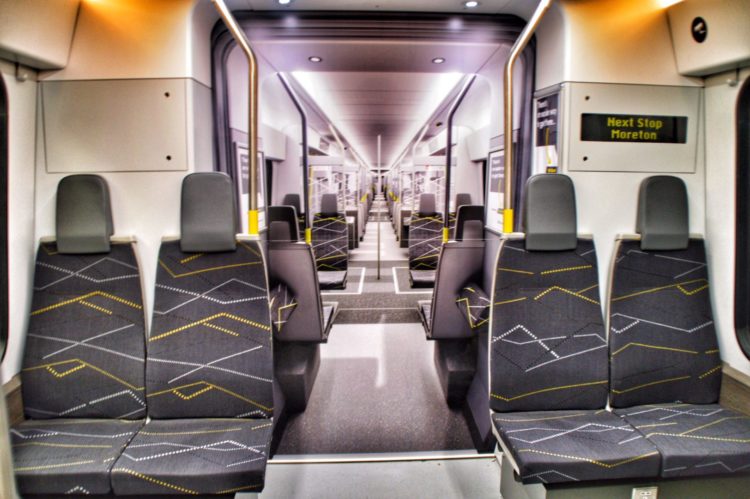 The trains being used on the network now all date back decades with some coming into service as long ago as 1978. Mr Powell added: “We have seen growing demand for the service over the past decade and the current fleet will not be able to meet that demand.

“They are performing well given how old they are but it is getting more and more difficult to keep them going.”

He said the fleet would be more energy efficient and would accelerate and decelerate more smoothly, enabling `Merseyrail to cut journey times and slash on emissions. He also claimed the investment would boost the city region economy by £70m a year.

All the trains will offer, in Mr Powell’s words, “bloomin’ good wifi”, as well as plug sockets and USB charging points.

Andy Heath, managing director of Merseyrail, said the replica would go on display at Pacific Road in Birkenhead and then outside Lime Street station later this year. The dates are still to be announced.

Most UK train companies lease their rolling stock but Merseyrail will break with this tradition and will be buying the trains from Swiss manufacturer Stadler.

A deal was signed with the company in January last year and Thomas Zweifel, project director for the Merseyrail contract and Stadler’s deputy UK managing director, told LBN: “This is very important contract for us – it is our flagship project in the UK.”

He added that although the trains used some existing technology the overall design is bespoke for Merseyrail. The company has just started manufacturing the first of the new trains.

Merseyrail is currently still in negotiations with the RMT union over proposed changes to staffing on the new trains, which would see an end to the traditional guard role.

Video: ‘Walk on water’ in an amazing immersive tour of Toxteth Reservoir

Ships on the Mersey and high and low tides on Wednesday, December 8