Plans are being considered by the City Council that would transform the site of Liverpool’s Festival Gardens, into a ‘world-class cultural destination’. 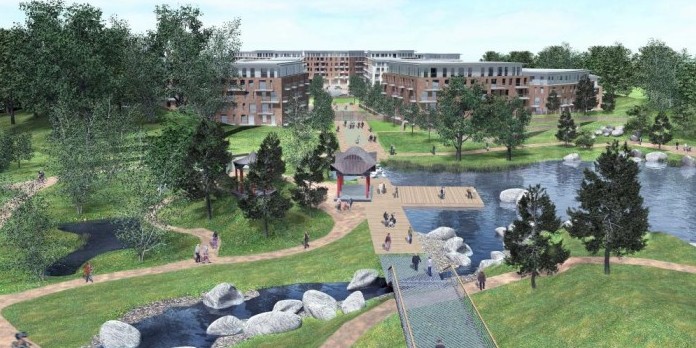 Mayor Joe Anderson is wanting the city to acquire the land and create open space for the public to use, which could also be used for community, cultural and artistic events.

In this way, the council sees the site as becoming an extension of the city’s current theatrical, musical and public art offer.

It is now in advanced talks with property investment and development company Langtree to acquire the land, some of which would also be used to develop quality new housing which would support the growth of the city.

The proposal is being considered by the city council’s Cabinet today (April 2) with a recommendation that the purchase be approved subject to a survey of the site and due diligence.

The plans describe how approximately 28 acres of the site would be used for housing development, with 66 acres being protected as open space which could be used for cultural activities.

Langtree says it is currently considering all options for the site and has been in dialogue with a number of potential partners.

“We have a unique opportunity to create a special open air venue which would be an important addition to the city’s cultural offer.

“The collapse of the housing development market brought about by the credit crunch in 2008 unquestionably created major challenges for all the partners who were involved in trying to bring forward plans for this site.

“We think the proposal on the table now represents a very positive way forward and that the city council is well placed to drive the potential of the site as both a visitor attraction and a development asset.”

A report to the council’s cabinet says:

“The site represents some unique opportunities for cultural events, concerts, exhibitions and community engagement. Because of the nature of the site it could be an extension of the city’s theatrical, musical and public art offer.

“Examples could be holding an artist in residence programme working in partnership with the Universities and using the site as a vibrant outdoor classroom with activities for school children through to adults enabling them to experience the diverse horticulture of the site.

“An opportunity also exists for Culture Liverpool to work with Liverpool Biennial and Tate Liverpool to develop a coherent and integrated approach to the development of the Festival Gardens site as a unique and world-class cultural destination.

“Ideas could include an outdoor gallery of public art commissions. The site could then operate as an interactive artists’ playground for children, families and adults.”

“We are proud to be associated with this important site and despite the considerable economic challenges we have experienced during the period of our ownership, we have successfully restored the gardens, opened them to the public, put in place a management regime for their maintenance and created a platform from which the site can be further developed.

“As a business we are already a significant investor in the city region and look forward to investing further in the years to come.”

A detailed and extensive master-planning process carried out in partnership with Liverpool City Council culminated in a planning application being submitted November 2006 for the development of 1,308 apartments and 66 town houses.

Proposals to restore the Chinese and Japanese gardens, the lake and the creation of new woodland walks were included within the plans.

The application was approved by the city council in May 2007 but was later called in for a public inquiry, with final consent being granted in July 2008, during the onset of the credit crunch and global recession.

Langtree successfully undertook a major programme of remediation to enable the public to use the garden site as open space. Following the successful completion of the work, the gardens were opened to the public in 2012.

‘Look to the New World’ with Liverpool LightNight