Everton FC’s ‘The People’s Project’ includes a new £500m arena in Liverpool’s north docklands and a number of housing and community projects on what is now Goodison Park. Tony McDonough reports

Everton FC’s current Goodison Park home could be replaced by affordable housing, a health centre, community-led retail spaces and a youth enterprise zone when the club moves into its new stadium.

Office and business facilitates also form part of the outline planning proposal submitted to Liverpool City Council as part of ‘The People’s Project. Everton will soon start work on a new £500m arena at Bramley Moore Dock next to the River Mersey.

The club plans to kick off the 2023/24 Premier League season at the new stadium within Peel’s £5bn Liverpool Waters development. When completed, the ground will be able to accommodate 52,888 spectators.

The Goodison Park Legacy Project, which allows the Club to build on the life-changing and life-saving work of its official charity Everton in the Community, could include a number of community assets.

Combined, both developments would help kick-start the regeneration of the northern docklands, contribute a £1bn boost to the city region’s economy, create up to 15,000 jobs, attract 1.4m visitors to the city each year and deliver an additional £237m of societal value.

The planning milestone comes after the club submitted a detailed planning application for a new stadium at Bramley-Moore Dock in December 2019, with both applications due to be determined this summer.

Professor Denise Barrett-Baxendale, chief executive of Everton, said: “Everton is a football club deeply rooted in its community and the Goodison Park Legacy Project is a symbol of our ambition, desire and commitment to Liverpool 4.

“We’ve been delighted by the support of the local community to our plans and the acknowledgement that we are creating facilities to empower and equip local people for generations to come.

“This project at Goodison Park is as ambitious as our new stadium development at Bramley-Moore Dock and will build on the £10m investment in buildings already made by the club and Everton in the Community in Liverpool 4 over the last five years.” 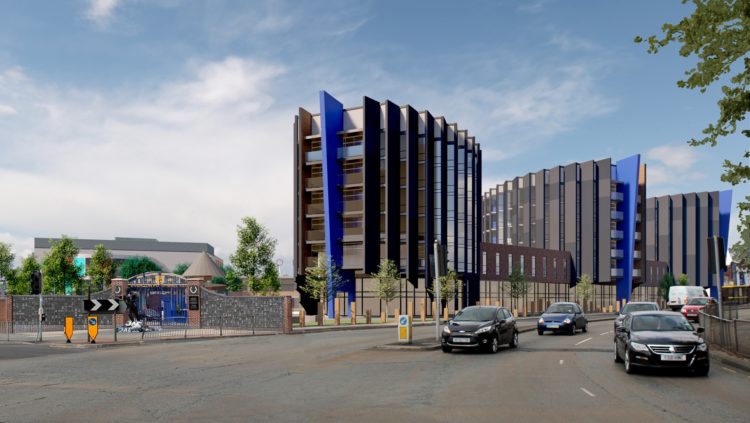 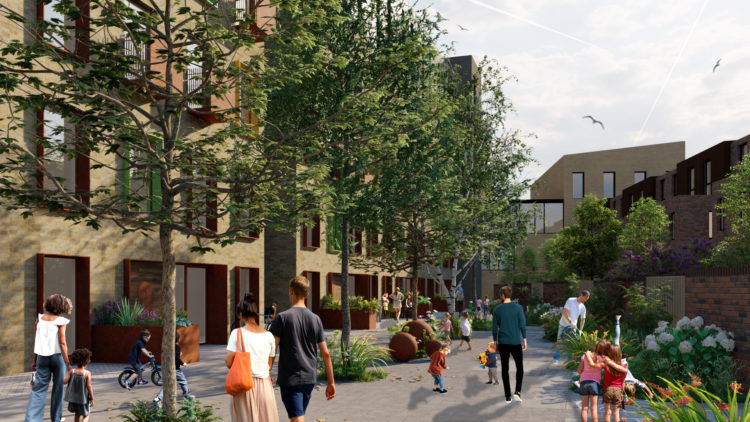 The outline application states that the scheme could include a Health Zone with a multi-purpose health and well-being centre; an Education Zone which could allow for the expansion of the Everton Free School or a new facility for adults.

There is also the potential to build a new children’s centre for community use; community/green space, including the potential use of the current centre circle as a lasting reminder of Goodison Park’s footballing legacy; and a mix of up to 173 houses and apartments.

The outline plans also include spaces for community-led retail, food and drink outlets and more than 50,000 sq ft of office space, aimed at encouraging local start-ups and young entrepreneurs while space will also be occupied by the further growth of Everton in the Community.

Colin Chong, stadium development director at Everton, added: “These plans are being submitted as an ‘outline planning application’ to seek permission for this development based on its maximum size, scale and potential uses.

“The club, working alongside the local community, will refine the exact offer as we get closer to the build stage, ensuring that it will be completely fit for purpose, and is supported by and meets the needs of the people it will serve.”

Everton has been advised by CBRE’s UK Planning and Development Team for both the Legacy Project and new stadium plans. Condy Lofthouse are the architects for the Goodison Park Legacy Project.

Merseyside buses and trains to be free for NHS workers

Ships on the Mersey and high and low tides on Thursday, April 9