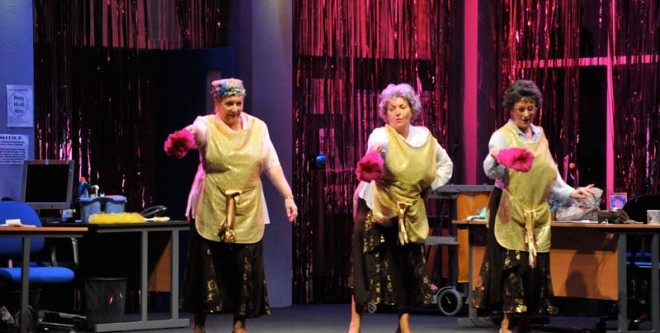 After a sellout UK tour in 2014, the smash hit show Dirty Dusting returns to the stage this year and comes to Liverpool’s Epstein Theatre this October for a strictly limited run. The play is written by the same team that brought you the hugely popular Waiting For Gateaux, which ran at the theatre earlier this year. Gladys, Elsie and Olive are three cleaning ladies who are about to be ‘put out to pasture’ by their overzealous office manager Dave. Feeling they have little chance of gaining employment elsewhere, the ladies have to find a way to make ends meet.

A chance wrong number requiring a Sex Chat Line rings into the office and gives them a great idea… “Why not run a Sex Chat Line?” After all, their age and appearance won’t matter on the telephone and providing they can keep this a secret from their boss, they could be on to a real winner.

Needless to say… things don’t go entirely according to plan.

Dirty Dusting is a heart-warming, laugh-out-loud, feel good comedy that will have you rolling in the aisles and smiling every time you answer the phone.

North East based writers Ed Waugh and Trevor Wood have written eleven successful plays including Dirty Dusting and the popular Waiting For Gateaux, which ran at the theatre earlier this year. The play is also directed by Leah Bell.

Get your glad rags on and your feather dusters at the ready and pick up your sparkling telephone to book your tickets now.