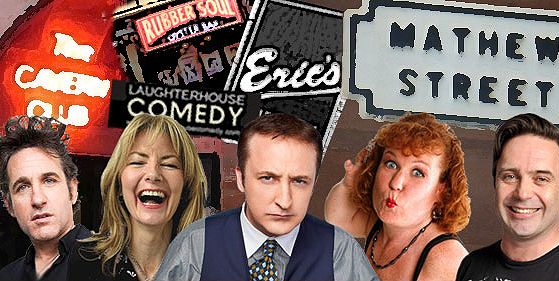 Mathew Street has plenty to be proud about as it prepares to announce the arrival of its brand new comedy club this weekend.

Laughterhouse Mathew Street launched on Friday, 27th November with an excellent line-up of laughing stock comprising comedy heavyweights Mick Miller, Neil Fitzmaurice, Jo Caulfield, The Boy With Tape On His Face and Chris Cairns, who will perform their unique brands of comedy in front of a sell-out crowd.

Liverpool’s most successful provider of live comedy, Laughterhouse hosts the popular comedy clubs at The Slaughter House and Philharmonic Hall and has converted the original famous music club Eric’s into a purpose built comedy venue.

Something of an institution in Liverpool, Eric’s music club was a pioneering venue and the launchpad for many local bands and musicians in the 70s from Elvis Costello and The Clash to The Ramones, The Sex Pistols and many more.

Guests can enjoy the perfect night out in the beautifully refurbished 200-seater venue on the world-famous Mathew Street – the heart of Liverpool’s historic music quarter. The venue is spacious enough to comfortably accommodate group bookings, yet is intimate enough to ensure an idea comedy atmosphere.

Guests can book Meal Deals as Laughterhouse Mathew Street has partnered with outstanding restaurants Olive and Piccolino to offer a fabulous dining experience. Plus, following each comedy show, guests are welcome to stay for the disco and live vocalists which will see them through to the early hours. So a Laughterhouse Mathew Street ticket guarantees a great night out from start to finish.

Paula Harrington, the owner and brains behind Laughterhouse Comedy, said:

“We have just put the finishing touches to our purpose built comedy venue on the world famous Mathew Street and can’t wait for the grand opening on Friday. We believe this space could become one of the finest comedy rooms in the UK and it is a perfect sister venue to our successful Slaughter House venue.”

So if your chuckle muscles are in need of a good work-out, head to Laughterhouse Mathew Street at 9 Mathew Street, Liverpool L2 6RE.

To book tickets telephone the booking line on 0800 177 7575 or book online at www.laughterhousecomedy.com

Plus Dane plumber named apprentice of the year