A magnificent pair of Shire horses and an authentic Edwardian dray recreated the occasion when Liverpool Blue Coat transported its rare and historic Father Willis organ from its old School to the present Wavertree building 113 years ago.

Such an unusual sight resulted in coverage by regional TV and radio news programmes. BBC North West Tonight and ITV Granada Reports featured the event on their main evening bulletins, as 20 of the original organ pipes retraced their original journey.

The pipes were loaded and unloaded by Blue Coat School’s two top organ players, sixth formers Daniel Greenway and Simon Cheung, who accompanied them throughout the four-mile trip.

The original event took place in April 1906, after the school outgrew its 1717-built Liverpool city centre premises in School Lane and relocated to a new landmark building in Wavertree, south Liverpool.

With it came the 1,224 pipe, two manual Father Willis organ of 1875, which was too valuable to abandon – a lucky escape as the building was Blitzed in World War II.

Apart from being dismantled and re-erected, the organ is unusual in never having been rebuilt or altered in 144 years, thereby retaining its rare ‘Father’ Henry Willis’ Victorian voice. After verging on the unplayable, it is now fully-restored by original builder Henry Willis & Sons, courtesy of a National Lottery Heritage Fund grant in December 2018. 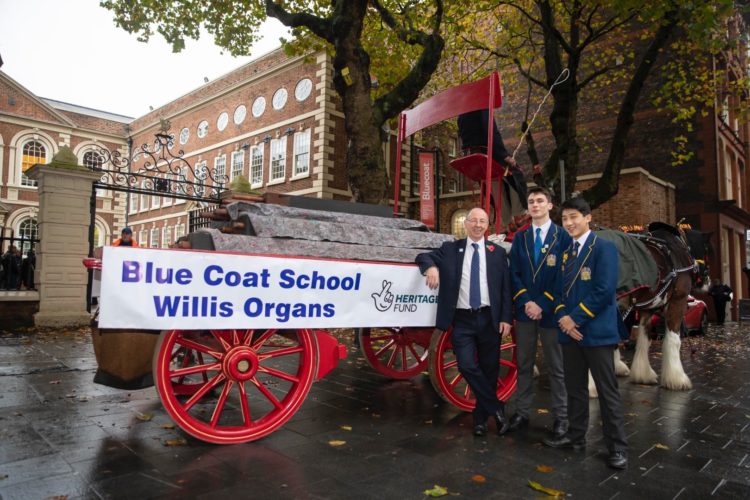 For the first time, Blue Coat School will host a series of public concerts featuring the organ, which is also ideal for accompanying choirs. This is part of its new community outreach programme agreed with the National Lottery Heritage Fund, which paid for the restoration.

Peter Elson, Blue Coat For All project manager, whose main task was fund-raising and organising the restoration, said: “I want to put organ playing back at the heart of the British music education and so I believed a very special event was necessary to mark our Father Willis’ return after rescuing it from possible dereliction.

“Recreating the organ’s move 113 years ago seemed the obvious means and we had tremendous support from the Bluecoat arts centre, which occupies our old building, Liverpool City Council, Merseyside Police and not least Steve Ledsham, of Shire Horses & Carriages, Shropshire, with his fabulous team.”

Global Britain – with a Northern accent

Ships on the Mersey and high and low tides on Tuesday, November 26