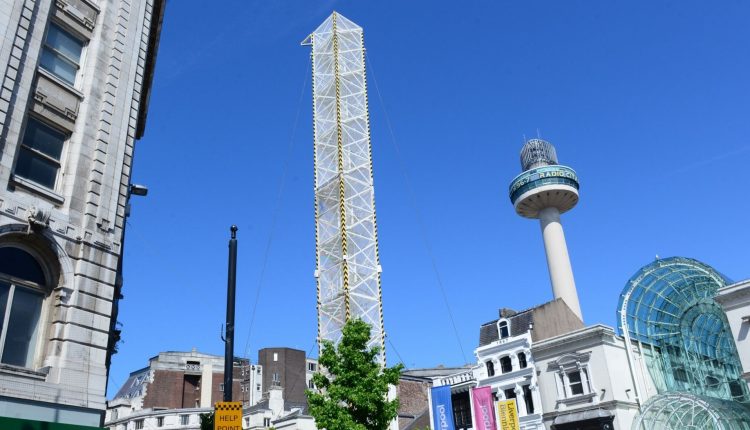 The UK’s first city centre zip-wire ride has received a two week extension, due to an excellent reception.

In its first three weeks the Liverpool Wire has hosted thousands of thrill seekers and with no sign of on-line bookings slowing down organisers have decided to extend the run until Sunday, September 21.

The demand has been part fuelled by fundraisers who have used the ride to already generate an estimated £50,000 for numerous charities.

One kind hearted rider has used the adrenaline fuelled attraction to rack up £5,000 for the British Heart Foundation while several city centre businesses such as Lloyds Bank, Thomas Cook, Radio City, Wetherspoons and Everton Football Club have all raised monies for good causes by riding the 800ft long wire.

The giant ride sees dare devils ascend a 115 foot station on Church Street – Liverpool’s busiest street – before high-flying over thousands of shoppers on a wire at speeds of up to 40mph.

The Liverpool Wire then deposits breathless users about 30 seconds later, after travelling more than the length of the premier league pitches at Goodison Park and Anfield combined.

‘’The response from the public and businesses to the Liverpool Wire has been simply brilliant. The sight of people flying above shoppers has added a real buzz to the city centre and we’re delighted with how much everyone has been able to raise for their chosen charities.

‘’To have to extend it for another two weeks speaks volumes for how much its captured the imagination and how generous Liverpudlians are.’’

‘’We’re delighted to be extending the Liverpool Wire for another fortnight. We knew Liverpudlians would be up for the Wire Challenge and they haven’t disappointed. Now those who haven’t been able to have two more weeks to rise to it.”