A 360-degree ‘Sky Bar’ 18 storeys up will be one of a standout features of a new hotel opening in Liverpool this summer.

INNSiDE Liverpool will be a 207-bed facility located in what was known as City Tower above the former Liverpool Post & Echo headquarters in Old Hall Street. It is scheduled to open on August 16.

Echo publisher Reach sold a portion of the freehold interest in the building, which had previously housed the paper’s printing presses, for £6.6m in 2018. It entered into a joint venture with Dubai-based Select Group to redevelop the site, which the former a 15-storey office block.

The Echo had occupied the building since the 1970s and, following the sale, it relocated its 600 staff, including its team of journalists, just a few yards across the road to No 5 St Paul’s Square. 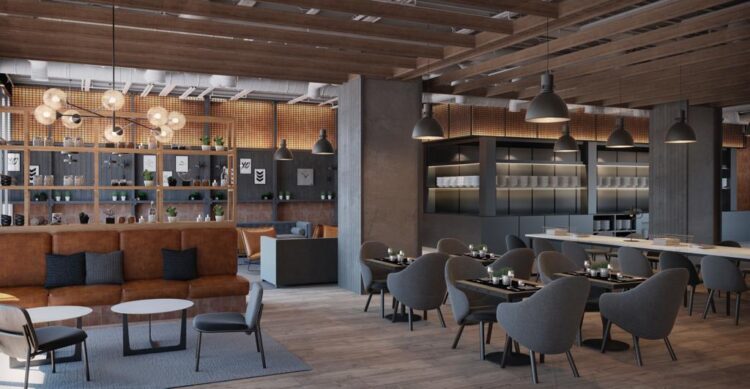 Meliá Hotels International, Spain’s largest hotel group, is the operator of the new hotel which will also offer an open plan lobby, “destination restaurant” with 140 covers, conference and events space, and a 24-hour gym. Located on the 18th floor, the the double heighted 360-degree Sky Bar, will offer view acocross Liverpool and the River Mersey, and Meliá says the venue will “come alive with music from resident DJs”.

For business travellers, the hotel will offer seven adaptable meeting rooms including the Big Idea Space alongside other rooms such as The News Room, The Printing Press and The Post Room; a nod to the building’s history.

A dedicated events floor with capacity for over 340 people and separate catering breakout is aimed businesses looking to host large scale gatherings. It will offer floor to ceiling windows, natural air flow and integrated audio-visual equipment in all spaces.

Garry Fortune, cluster general manager, UK North at INNSiDE by Meliá, said: “The past 12 months has been exceptionally tough for so many but we are thrilled to be launching our third UK INNSiDE by Meliá property in the heart of Liverpool this summer.

“As a group, INNSiDE by Melia has gone from strength to strength following the launch of our Manchester site in 2015 and the brand new INNSiDE Newcastle set to open this spring.

“With a further two sites in the pipeline, it has been gratifying to see the brand so well received as we strengthen our roots in prime locations in the north’s most diverse cultural hubs.”

Joanne Anderson is the new Mayor of Liverpool

Technological change in UK maritime is…

Ships on the Mersey and high and ow tides on Saturday,…

Joanne Anderson is the new Mayor of Liverpool