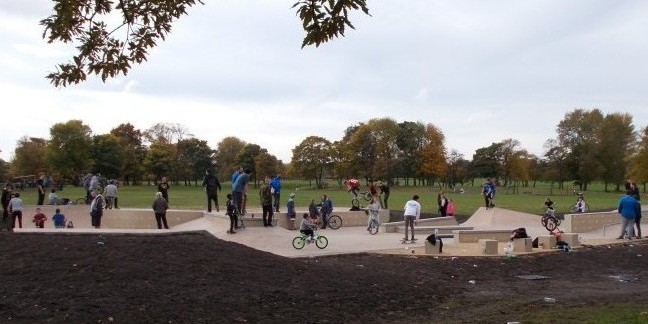 A new action sports hub for skateboarders, BMX and scooter riders is to be officially opened in Newsham Park.

The hub is the final part of a £1.5m programme which has seen five wheeled sports hubs introduced throughout the city.

Funding was allocated to projects for young people. A three month consultation took place with more than 1,000 young people to ensure the right facilities were built in preferred locations.

The results of the consultation showed they wanted the sites to be multi-purpose -suitable for skates, skateboards, scooters and BMX bikes and be suitable for all abilities from beginners to advanced.

Sports hubs at Scargreen, Garston, Otterspool and Everton Park are already in use.

The Mayor of Liverpool, Joe Anderson, will open the Newsham Park hub on Friday 30 October at 11.30am. He said:

“This initiative has been driven by the young people of the city. They told us what they wanted and we have delivered it in full.

“All the hubs are different – they have been individually designed and have their own characteristics but the one thing they have in common is that they are proving extremely popular.

“Even though it has not been officially opened the one in Newsham Park has seen a lot of skateboarders and BMX riders trying it out and it’s great that they have been able to have a new facility in half term week.”

The new hub has been designed and built by Canvas Spaces Limited at a cost of £250,000.

A commercial sponsor is being sought for all the hubs to help support costs and ensure that the sites remain attractive and popular with a regular programme of events.

Tennis for Free at Sefton Park