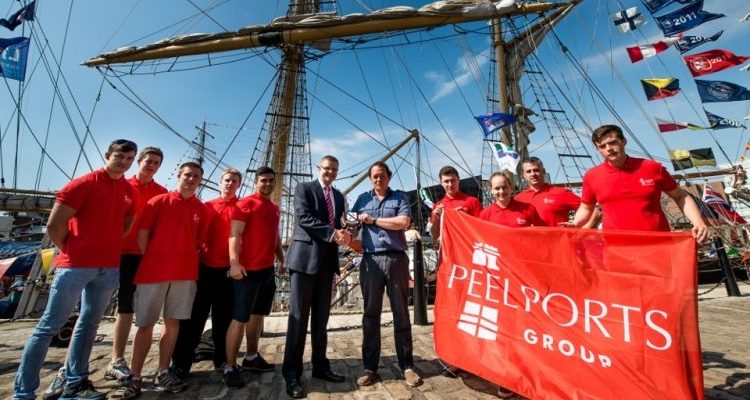 Peel Ports nails its colours to the mast with support for ground-breaking sailing challenge for apprentices. 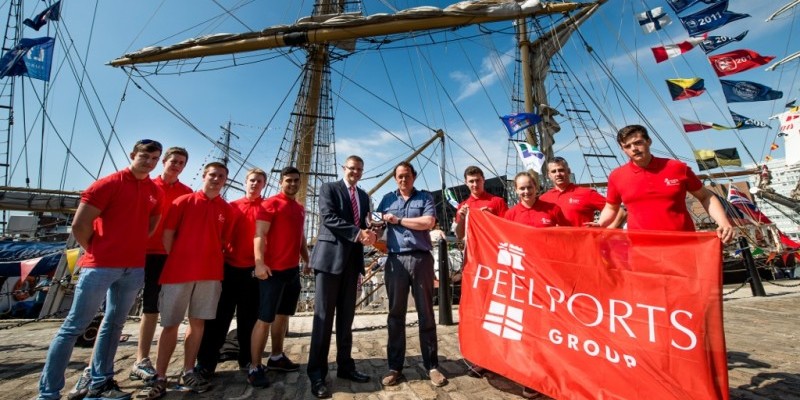 Peel Ports Group has committed its support to the ground-breaking Apprentice Ship Cup Challenge, which gives youngsters a once in a lifetime opportunity to learn new skills while racing Tall Ships across the Irish Sea.

This year Peel Ports, a leading UK port group, gave two teams of apprentices the chance to take part in the inaugural event, with many of its 17 apprentices winning awards for their performance during the ten day return journey from Liverpool to Whitehaven.

Now Peel Ports, which operates ports and terminals across the UK and Ireland, has announced it is to become the first major sponsor of the Apprentice Ship Cup Challenge in 2015.

Organised by the Merseyside Adventure Sailing Trust (MAST) this year 173 apprentices aged between 16 and 25 took part in the competition.

Next year the Apprentice Ship Cup Challenge will be run as part of the final day of the International Mersey River Festival on Friday, June 7 with the organisers hoping hundreds more youngsters will take part in the challenge which will also sail to Ireland and Scotland for the first time ever.

The event gives apprentices the chance to develop their individual and team working skills whilst on board one of seven specially commissioned Tall Ships and Peel Ports hopes to send an even bigger team of competitors for next year’s event, which will call at Liverpool, Belfast and Whitehaven, as well as stopping in Scotland as part of the Clyde River Festival and Dublin for the Dublin River Festival.

This year Peel Ports’ apprentices came out top in several categories with Megan Pickering and George Day being named as two of the Apprentice Challenge winners. A watch from The Pelican of London which consisted of four Peel Ports apprentices was also named the top watch during the whole challenge.

“This year’s challenge was an outstanding success, thanks not only to the hard work of the apprentices who took part but the support of the company sponsors. As a result we have decided to make this year’s event bigger than ever, incorporating Scotland, as well as England and Ireland. We have also had interest from companies and apprentices in China, France and Holland.

“Peel Ports has offered us extensive support to our work as a charity over the past few years and we have valued their continued support through the Apprentice Ship Cup, so we really are grateful for their commitment yet again.”

Peel Ports operates a successful and expanding apprenticeship programme employing more than 40 apprentices across the Group, developing their skills in a range of mechanical and electrical engineering skills.

“It is important for us to demonstrate our commitment to the Apprentice Ship Cup Challenge by becoming its first major sponsor. Our apprentices are hugely important to us and we have an extensive apprenticeship programme in place across all our terminals. This experience will be something completely different for them, but they will learn a great deal about team work, which is an integral part of our business.

“It is important to us that we help each and every one of them develop their career within the industry. We also encourage them to develop themselves as individuals, helping build their confidence and communication skills, which are just as important as the technical skills.

“What really is great is that this year the event calls at Dublin and Greenock, where we operate nearby ports and terminals, which will allow even more of our apprentices to take part. We look forward to working with the MAST team again this year on what promises to be another outstanding event.”

Peel Ports received the prestigious Apprentice Ship Cup Award 2014 thanks to the hard work and professionalism of its apprentices, their fundraising efforts and the support expressed by Peel Ports Group throughout the entire challenge.

Each apprentice received a Voyage Achievement certificate, as well as a nationally recognised Royal Yacht Association (RYA) competent Crew certificate. Those who took part really valued the experience and have been able to utilise the skills learned during the challenge in their employment at Peel Ports.

“It was great fun learning how to sail a ship – something I’ve never done before – but the challenge also taught me lots about working as a team and the benefits of listening and communicating with each other.

“When you’re out at sea on a small boat and lots of people communication and team work is essential and that is definitely something I have been able to put into practice during my engineering apprenticeship.

“I would never have had the opportunity to do something like this if it hadn’t been for Peel Ports. They are a great company to work for and have helped introduce me to a diverse range of skills and techniques within the sector. I would definitely like to continue working with them after I complete my apprenticeship.”

The Apprentice Ship Cup 2015 will run from Friday, June 7 2015 till Wednesday, June 22 starting and finishing at the Port of Liverpool. The ships will call at Dublin via Belfast and then Greenock via Whitehaven, before sailing back to Liverpool. An awards dinner to recognise the work of the apprentices will take place on Monday, 27th June at the Titanic Hotel, Liverpool.

More information about the challenge can be found at www.mastapprenticeshipcup.co.uk