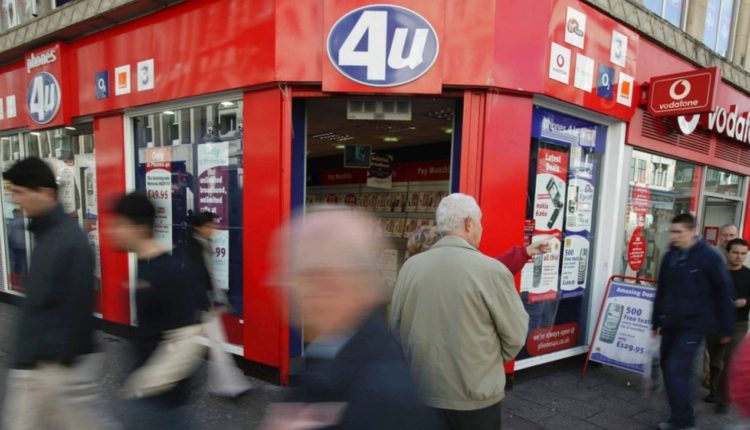 Phones 4U, the British retailer founded by entrepreneur John Caudwell that has spent the majority of the last decade in private equity hands, has gone into administration, boosting the share price of rival Dixons Carphone by nearly 3 per cent on Monday morning.

Phones 4U, which is is owned by London buyout house BC Partners and employs over 5,500 people, said on Sunday it had been forced to seek protection from its creditors after two of the UK’s largest mobile phone operators decided to withdraw products from its stores next year.

The move will put thousands of jobs at risk, including staff at Phones4U’s four Liverpool branches, with three stores located in the city centre and one in Bootle.

With an 11 per cent share of the UK mobile phone market, analysts were bullish about the prospect of Phones 4U customers migrating to the recently merged electronics retailer Dixons Carphone, which already controls nearly 20 per cent of the market. Its shares rose 2.7 per cent to 382p in early trading.

In a note to clients, Alistair Davies, Investec analyst, estimated that Dixons Carphone could grab up to £225m in annual revenues from its rival, which “could represent a £45m opportunity for forecast” full-year pre-tax profits by his calculations.

Assad Malic, analyst at Citi, said he envisaged Dixons Carphone “becoming the central link bridging the relationships between operators, product manufacturers and the consumer – strengthening as convergence technology drives growth in the ‘Internet of Things’.”

He added: “In the near term, we see upside to the synergy targets driven incrementally by operational cost savings and a substantial rollout of a mobile shop-in-shop offering across its core markets.”

The administration comes a year after BC Partners added more debt to the company, so as to take a special dividend. This means that Phones 4U’s 550 stores will face closure “pending a decision by the administrators on whether the business can be reopened for trading”, the retailer said.

The final blow was dealt by EE, who on Friday announced they would not be renewing their contract with Phones 4U next year, a decision that came less than two weeks after a similar move by Vodafone. The withdrawals reflect a strategic shift among mobile network operators and a reluctance to pay commission to third-party retailers, who in fact compete with their own high street stores.

Without these two contracts, the company “is suddenly in a position where it will be without a mobile network partner when the current contracts expires”, Phones 4U has said, adding:

“The unexpected decisions by both Vodafone and EE have come as a complete shock to the business.”

“Today is a very sad day for our customers and staff. If the mobile network operators decline to supply us, we do not have a business.”

Last year, Phones 4U generated more than £1bn in sales and had earnings before interest, tax, depreciation and amortisation of £105m. It has “significant cash in the bank”, it said.

Despite the company’s troubles, BC Partners, which acquired Phones 4U in 2011 for about £600m, will have secured a 30 per cent profit on its investment thanks to the payout funded last year through the dividend recapitalisation.

Stefano Quadrio Curzio, the BC partner who oversaw the investment, blamed Vodafone for the company’s demise:

“Vodafone has acted in exactly the opposite way to what they had consistently indicated to the management of Phones 4U over more than six months.,”

“Their behaviour appears to have been designed to inflict the maximum damage to their partner of 15 years, giving Phones 4U no time to develop commercial alternatives.”

A spokesperson for EE confirmed the reasons for their withdrawal:

“In line with our strategy to focus on growth in our direct channels and to move to fewer, deeper relationships in the indirect channel, and driven by developments in the marketplace that have called into question the long-term viability of the Phones 4U business, we can confirm that we have taken the decision not to extend our contract beyond September 2015.”