A unique healthy eating company, which prepares, cooks and delivers great tasting and nutritional meals direct to your door officially launched its new mobile menu at this weekend’s Liverpool Food and Drink Festival. 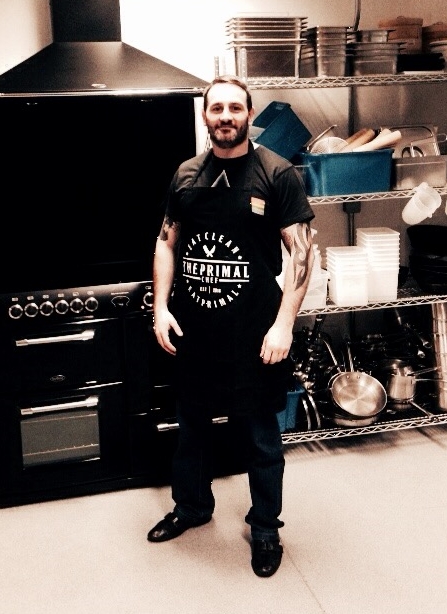 The Primal Chef is the brain child of Hunts Cross-based Anthony Duffy, who set up the business last year with the aim of taking the hassle out of healthy eating. It offers Paleo friendly food made using the freshest locally sourced, organic ingredients.

The launch of The Primal Chef’s mobile menu means that people will be able to enjoy tasty paleo food on the go, choosing from a range of freshly made dishes such as the Primal Chicken Flatbread and the Primal Breakfast Bowl with pulled pork and sweet potato. The recipes will be rolled out at food festivals and events, and will be used as a springboard to promote The Primal Chef’s Paleo meal plans.

All dishes have been created by Anthony and his partner, and he has used his experience of eating Paleo and training as an MMA competitor to develop the nutritionally balanced meals. The Paleo diet is based on the notion that to achieve optimal health, we should eat like our ancestors from the prehistoric hunter-gatherer era.

The rationale behind the Paleo diet is that our bodies have not evolved as quickly as our agricultural abilities. There is increasing scientific and nutritional evidence to show that this type of diet, can benefit health, reduce the risk of chronic disease and help to lose weight.

The new mobile menu showcased at the all new Liverpool Food and Drink Spring Festival over Easter weekend at Sefton Park. Anthony was on hand to explain the Paleo philosophy and show people how easy and tasty it can be to eat healthily, as well as giving them a chance to sample the new Primal Chef mobile menu.

“Keeping fit and healthy in today’s modern world is not easy. Making the right food choices requires thought, time, effort and constant decisions. If all of this wasn’t difficult enough, we live in an environment which is constantly tempting us away from eating well.

“We have less time and energy than ever to buy, plan and prepare food that fuels our bodies with the best nutrition. Most of the time we take the easy option, choosing convenience and taste over health and nutrition. With The Primal Chef I believe that convenience, great taste and health can co-exist in our diet and with the correct approach we can enjoy our food and look after our health at the same time.

“I first learned about the Paleo diet when I was training as an MMA fighter, as it gave me all the nutritional values I needed to maintain my energy, muscle mass and weight – which was particularly important during competitions.

“Unfortunately I sustained an injury while training for a fight last November so had to take some time out, but on a brighter note it has meant I have had more time to develop The Primal Chef business concept – something I would never have been able to training twice a day and looking after my two young daughters.

“I’ve been working on The Primal Chef menu since the end of last year and have already secured a several regular clients, including actress Suzanne Collins. I am also working with Andy Grant a former Royal Marine who lost his leg while serving on the frontline and still managed to set a 400m world record at the Invictus Games.

“Lots of people have heard about the paleo diet, but not many people really understand what it’s all about and lots of people think it’s too complicated and time consuming. I’m hope that by going along to the Liverpool Food and Drink Festival we were able to dispel some of the myths show people just how easy healthy eating can be and the benefits it can bring.”

The Primal Chef has teamed up with fellow Liverpool-based healthy food and drink company Just Juices, which has created the UK’s first range of 100% natural super juices which not only look good, but taste great.

For more information on the Primal Chef and the Paleo diet philosophy visit www.the-primalchef.com

Bruntwood hop to the fundraising plate for Claire House