Relive the sounds of the sixties at St George’s Hall

Two bands who produced some of the Swinging Sixties’ most iconic songs are heading to Liverpool this month to perform at St George’s Hall. 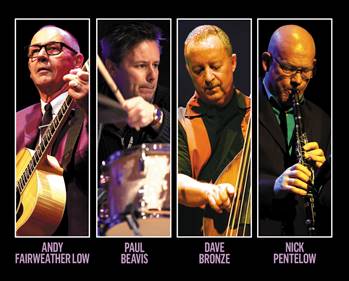 Andy Fairweather Low and The Low Riders will play The Concert Room at the stunning St George’s Hall Liverpool on Friday 6 May,followed three weeks later by The Troggs on Saturday 28 May.

Andy Fairweather Low came to prominence as the lead singer in Amen Corner. The 1960s saw them clock up hit after pop hit – including Bend Me Shape Me; Hello Suzy; and (If Paradise is) Half As Nice, which are all internationally remembered to this day.

The hits were only the beginning, as a successful musical career has seen Andy work with legendary artistes Eric Clapton, George Harrison, Bob Dylan, Jimi Hendrix and Elton John.

Andy Fairweather Low (guitar and vocals) is joined by The Low Riders, who are Dave Bronze (bass and vocals), Paul Beavis (drums), and Nick Pentelow (sax and clarinet).

The Troggs have a string of endless hit songs to their credit. From rock anthem Wild Thing and Anyway You Want Me, through to I Can’t Control Myself and the unforgettable timeless classic Love Is All Around – you won’t want to miss this trip down memory lane.

Dubbed by many as the ‘first British punk band’, The Troggs have continued playing in their own uncompromising style of good basic rock music which catapulted them to worldwide fame.

The Troggs line-up still features one of the original founder members, the legendary Chris Britton on lead guitar. They are now joined by lead vocalist Chris Allen (stepping in the shoes of Reg Presley), Pete Lucas on bass, and Dave Maggs on drums.

The popularity of The Troggs has never waned and they are still in great demand both in the UK and across Europe, where they regularly headline festivals and tour extensively. They have now also achieved ‘cult’ band status. Polygram in the USA and UK recently released a 52-track CD box set, while Castle Music Pictures and Polygram collaborated to produce a video spanning decades of great Troggs music.

Tickets: £22.00 (including administration fee) plus £2.25 fulfilment fee per order

Purchase in person at TicketQuarter, Queen Square, Liverpool. Alternatively, tickets can be purchased online at www.ticketquarter.co.uk or by telephoning 0844 800 0410.

Tickets: £19.25 (including administration fee) plus £2.25 fulfilment fee per order

Purchase in person at TicketQuarter, Queen Square, Liverpool. Alternatively, tickets can be purchased online at www.ticketquarter.co.uk or by telephoning 0844 800 0410.