Revised masterplan for Warrington includes seating 2000 at its cinema

In a revised masterplan for Warrington, a 2,000 seat 10-screen cinema is soon to be submitted to the town’s council. 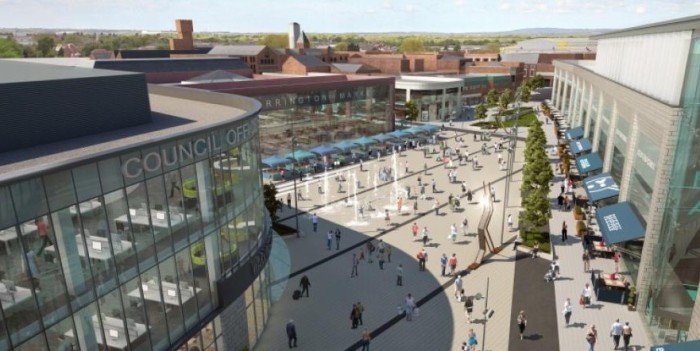 Council officials are refusing to reveal which cinema operator will be running the multiplex, but it is believed to be Cineworld.

The scheme will go to Warrington Borough Council’s (WBC) executive board for approval on April 13th of next week.

Council chiefs anticipate  the project having a “transformational effect” on the fortunes of Warrington town centre.

The scale of the new cinema, which will also have an IMAX will make it one of the largest in the region.

The up-scaled project is significantly larger than that previously announced, yielding a projected income of £5.5m a year for WBC.

Hoardings have been erected around phase one of the site in order that demolition works can commence later this month, ground works are ongoing.

The Bridge Street Quarter Regeneration project is being delivered by Warrington & Co, on behalf of Warrington Borough Council with development partner Muse Developments.

The first element of the Bridge Street Quarter regeneration scheme to be built will be a temporary market hall.

The market will move into this temporary location early in 2017 whilst the second phase of demolition is underway and whilst the new, permanent £10m, 31,150sq ft market hall is being constructed. At no time will the market close or cease to trade.

The project will create up to 400 construction jobs and 400 new permanent jobs in the leisure, retail and restaurant sectors when the whole project is fully completed in 2019.