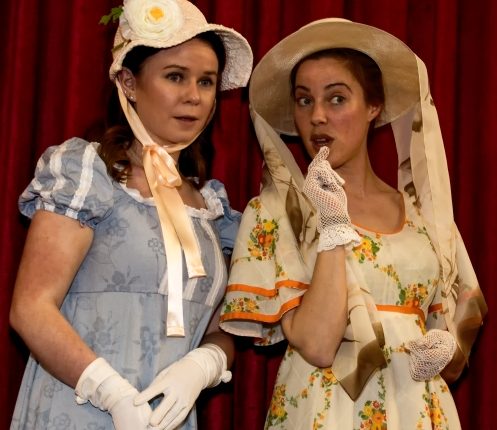 Award-winning Hand in Hand Theatre will return to St George’s Hall’s Concert Room in Liverpool this July to present a duo of plays about women.

First up is Ladies in Bonnets, a celebration of the heroines of Jane Austen in the 200th anniversary year of her death.

The all-female nine-strong cast will be bringing to life some of the characters from Austen’s famous novels, including Sense and Sensibility, Mansfield Park, Pride and Prejudice, Emma, Northanger Abbey and Persuasion.

Artistic director Bev Clark explained: “Her heroines are sometimes innocent, often courageous and outspoken but always loyal and true in matters of the heart. The character of Jane herself narrates as we learn a little of her life, family and views of the woman’s place in the world of mid-class regency England.”

In contrast, ‘Baggage’ is a new one-act play, written by Bev Clark, which deals with the issues of homelessness and friendship.

It presents two women, Sandra and Annie, who form an unlikely bond while dealing with their own emotional and physical issues. One is weary and frustrated, the other carries a tragic secret, but through it all they find hope.

Bev explained: “When you see someone on the street, it’s easy to judge but no-one knows that person’s story and sometimes all they need is a hand to reach out and offer friendship.”

St George’s Hall manager Alan Smith said: “This double bill will be a fantastic display of female work; we look forward to welcoming Hand in Hand back to St George’s Hall this summer!”