Jay Stewart, Head of Music at the Academy of St Francis of Assisi (ASFA) in Kensington, has been named Inspirational Teacher of the Year at the Liverpool Archdiocese School Awards. 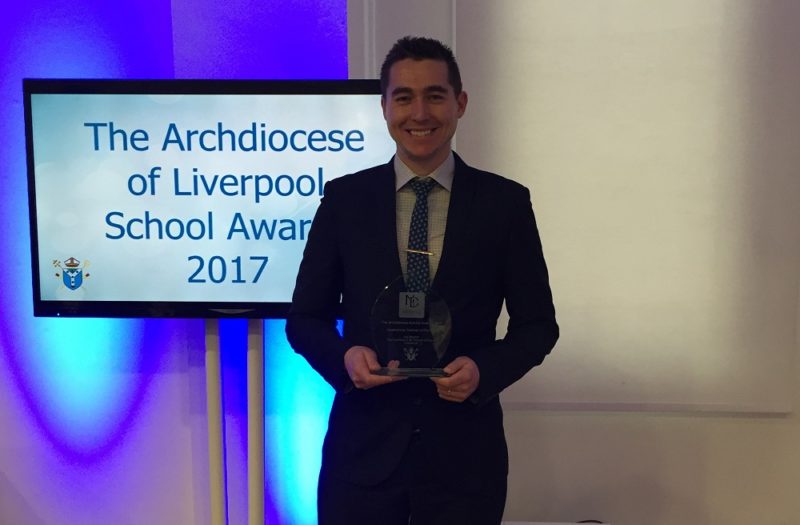 Nominated by staff and students at the Academy, Jay came out on top of teachers from over 200 Archdiocese schools across the local authority.

Jay joined the music department at the Academy in January 2015.

His work in the music department has encouraged many students to pursue the subject further and in a video entry form, Jay’s students praised him for his dedication to ‘pushing them beyond their limits.’

In the video, Year 8 student Lisa Mhagrh says: “I first met Mr Stewart in summer school before I started year 7 and I would not sing at all, but he was determined to get it out of me!

“He was so determined and persistent in pushing me out of my comfort zone and I really admire that.”

Year 12 student Taj Robinson adds: “When Mr Stewart found out I loved music he pushed me to do it even though I was really shy about it.

“But with Mr Stewart, if you’ve got musical talent he won’t let you go, he will push you to your best and never let you give up.”

This year marked the inaugural Liverpool Archdiocese School Awards and celebrated the excellence shown by students and staff from across 228 archdiocese schools in the region.

In addition to Jay’s win, the Academy was also shortlisted in two more categories. Tara Welsh, Leader of Learning Support was a runner-up in the Inspirational Support Staff category and student Ryan Dickens was shortlisted for the Sport Achievement award.

Jay says: “It is such a privilege and an honour to be recognised for the job that I love.”

“Everything I do is for the students.”

Tracey Greenough, Head of School, adds: “I am overwhelmed by the success of the Academy at the Archdiocese School Awards!

“To be shortlisted across three categories was an incredible achievement and for Jay to go on to win the award for Inspirational Teacher of the Year made the ceremony even more special.

“Jay Stewart is an asset to the Academy and I am delighted to work alongside him. I look forward to seeing what he has in store for the future.”

‘The time is now’ for homeowners looking to sell, says leading Liverpool agent

The new digital kids on the block