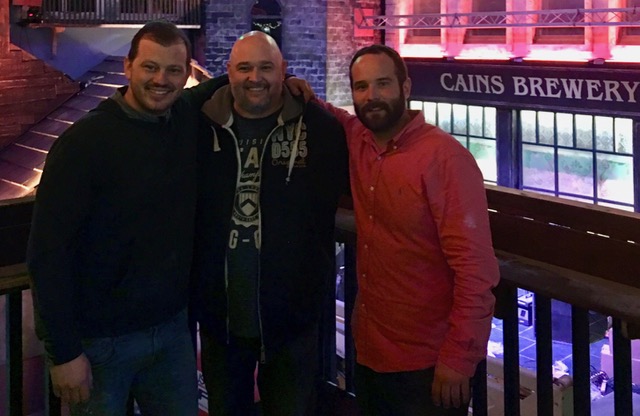 ON AIR is set to launch on March 15 with a performance from Zutons’ singer Dave McCabe and his new band Silent K.

The new music, cocktail and street food destination will welcome a host of Liverpool bands for their opening night, which will be hosted by BBC Radio Merseyside presenter Dave Monks. And the team behind ON AIR, Kip Piper, Danny Bolder and Ethan Allen, are well-experienced in launching successful venue concepts – they are the same team behind popular city attraction Ghetto Golf.

Perhaps unsurprisingly, ON AIR will centre around live music and offer its visitors a festival-like experience – complete with a secret garden mezzanine offering views over the main stage.

Dave Monks says: “The venue is like being on the Harry Potter set with live music!

“To launch the new venue Ethan and the team wanted a line-up that showed off some of the city’s best talent. We have Dave McCabe from The Zutons with his new band called Silent K headlining, along with two brilliant unsigned bands The Cheap Thrills and The Ambition.”

Dave says he’s particularly keen to see a live music venue opening in such a key part of the city.

“The opening of ON AIR is good news for music locally,” he says. “It’s really sad to see local venues close – this is something that must be addressed. Without these kind of venues it reduces the lack of opportunities for grassroots and emerging musicians to get experience and play to an audience.”

The launch on March 15 is the first night of a free St Patrick’s Day festival weekend offering the very best live music in the city. ON AIR will team up with Birdies Bar & BBQ to offer two stages of live music over the weekend.

The festival programme has been developed by music director Ethan Allen, who previously re-opened the legendary Liverpool live music venue Eric’s and went on to provide live music for more than 30 venues throughout the North West, working with more than 60 full time musicians.

Ethan says: “Cains brewery is exploding at the moment so we wanted to bring something unique to the city. Inside a huge warehouse we have built ON AIR, a full movie set, where you become part of the cast.

“Outside the front of the venue we have doubled the size of Birdies bar which is now a huge festival garden bar – think summer decking, palm trees, cocktails and acoustic music. A really cool chilled vibe.

“Alongside that we now have our BBQ, where a selection of different food vendors line the entrance to Birdies bar serving awesome tastes all day all night. I promise you we have thought of everything to give you an amazing experience.”

Keep kids entertained this Easter with Heritage on the Dock