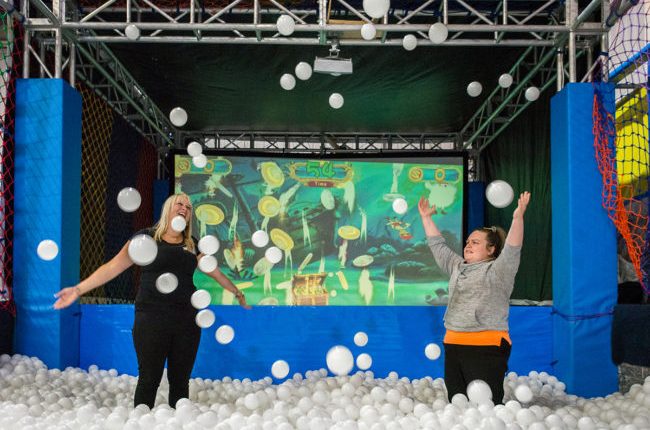 Believed to be the only one of its kind in the UK, the AR Zone attraction allows visitors to play a variety of video games from within a ball pool.

A new attraction, which ‘blends the fun of a ball pool with modern augmented reality gaming’ has opened at Air Factory trampoline park in St Helens.

The AR Zone is part of a 33m2 ball pool filled with more than 100,000 balls, along with some larger zorbs and inflatables that people can climb inside to float across the balls.

The new attraction, which is included as part of the trampoline park admission, is the first addition since the venue opened last autumn.

Kane McQuade, general manager of Air Factory, said: “Augmented reality is a real buzzword in the leisure industry, and we’re pleased to be the first trampoline park to bring this type of gaming experience to the UK.

“A huge new gaming screen has been fitted at the end of our ball pool and the AR technology uses cameras to monitor the position of the balls as the players launch them forwards.

“The action on screen and outcome of the games is directly affected by the players’ interactions with the balls themselves.

“It’s a unique attraction and a superb addition to our arena of trampolines, battle beams and slam dunk courts, marking us out as offering something different to other trampoline parks in the country.”