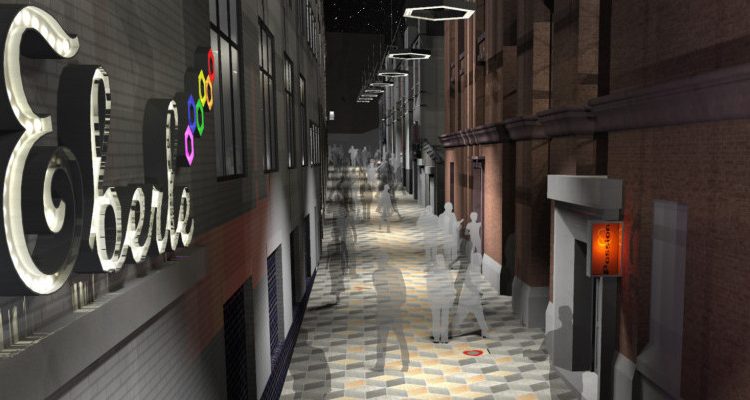 The heart of Liverpool’s LGBT quarter is about to undergo a dramatic transformation. 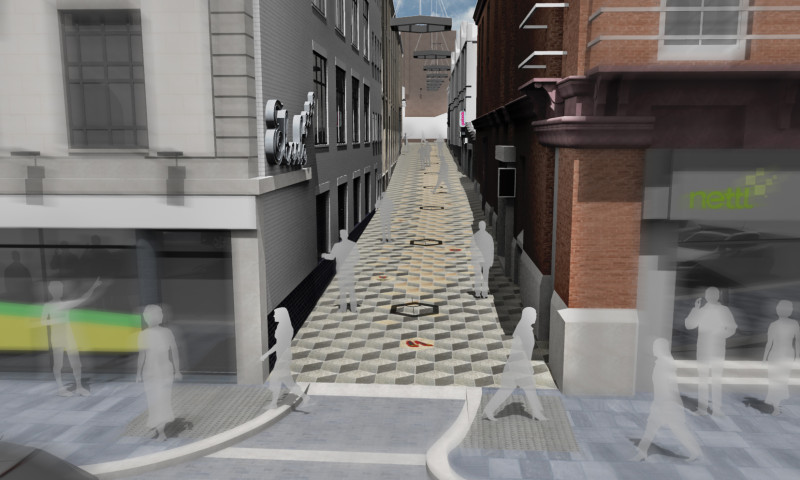 As part of a major makeover, Eberle Street will be revamped with a unique paving and lighting scheme that will pay homage to the mythical Emerald City, Yellow Brick Road and Judy Garland.

The works, funded by Liverpool BID Company and Liverpool City Council, represent the biggest investment in the city’s LGBT quarter for a decade.

To begin early January, the aim of the innovative renovation is to celebrate the city’s LGBT heritage and community with the designs also inspired by the rich cultural history of businesses in the area such as the Artist Club, Gbar and Garlands.

The current footway material of tarmac, with concrete kerbing, will make way for a levelled street featuring contemporary paving consisting of high quality stone which works sympathetically with the existing buildings.

To be completed in April, it is hoped Eberle street, which lies just 300 metres from the ‘Beatles mecca’ of Mathew Street and 150 metres from Liverpool Town Hall, will become an additional tourist attraction for the city.

“These works will give a unique look to Eberle Street in keeping with it being at the heart of the LGBT quarter.

‘’This is part of the city centre which is thriving and attracts many visitors and its transformation will make it an even greater attraction. Local businesses have been closely involved in the design process and are helping make this a very exciting scheme.”

The Eberle Street scheme is part of a £1.4m programme to improve walking connections north-south between the Commercial District and the retail core of the city centre.

The Commercial District BID has invested £900k in the two-year programme, raised via a BID levy on businesses, with the remainder funded by the City Council. This has led to the renovation of several key streets with improved footways and kerbs, road resurfacing, tree planting, street lighting and rationalising street furniture. Improvements to footways and lighting on nearby North John Street will also begin at the same time as Eberle Street marking the final phase of the programme.

“Eberle Street is a hub of Liverpool’s night time economy and LGBT community so its redesign required an imaginative approach that had the verve and style to celebrate its unique position and elevate it to a prominence it richly deserves.

“Once complete it will also greatly enhance the experience of this part of the Commercial District and promote the north-south walking routes between the district and the rest of the city centre.

‘‘As the nation recently saw with Granby Street’s Turner Prize winning transformation, meaningful regeneration has to be led by those who live and work in that area and the input from the business community has been a key part of the entire process.’’

“Eberle’s regeneration is one of the most exciting and important changes in the area that we have seen since we opened on this street.

“This side of Liverpool’s nightlife has the most diverse and safest environment in the city so this investment is extremely welcome and once completed the additional footfall will no doubt improve other surrounding businesses.

“Both ourselves, Garlands and other businesses have been involved extensively in the decision making process and were asked throughout by the BID, Amey and BCA what we would like to see incorporated into the new designs. Because of this meaningful style of consultation the final design gives the street a very new and personal feel.’’

The Commercial District public realm upgrade is part of a wider four year programme of works, which includes a new city centre ‘connectivity’ scheme including new and improved signage and lighting, dedicated coach parking, more priority for pedestrians and cyclists and a review of bus routes to reduce delays (to be delivered from 2017-2019).

What the Dickens is happening at St George’s Hall this Christmas?