A city united in remembrance 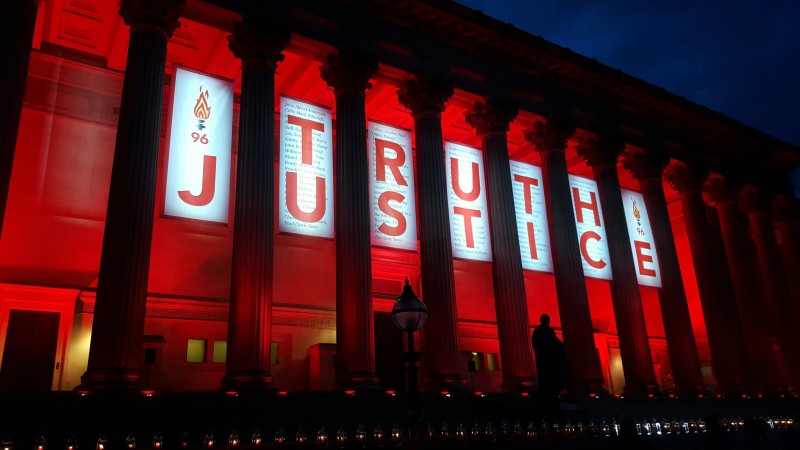 A generic-looking building on an unassuming industrial estate in Warrington was last week the scene for arguably the greatest victory in judicial and footballing history. The verdict of unlawful killing of the 96 Liverpool fans at Hillsborough in 1989 was the culmination of a brave, unwavering 27 year battle by the families of the victims. It was belated confirmation of what this remarkable set of people, and indeed the city of Liverpool, knew all along. It was a truth, which for far too long was an uncomfortable inconvenience for those in a position designed to ensure nobody should ever attend a football match and not return home. It was overdue vindication for the families, for their children’s, son’s, daughter’s legacies, legacies which certain organisations and publications set out to besmirch and dishonour in the most abhorrent manner possible. It was the truth. It was justice at last.

The overriding emotion in the wake of this verdict is pride. Pride in a city that refused to lay down and accept the hateful smears the last 27 years have heard. Pride in the dignity, bravery and humility shown by a group of people who refused to give up the fight.

Margaret Aspinall, chairwoman of the Hillsborough Family Support Group, said after the inquest:

“We went through every legal avenue possible knowing that vital evidence was being held back. To then see it, knowing they knew it was there all along, was sickening in the extreme.”

The spirit shown by the families of the 96 fans lost on that dark April day 27 years ago is a shining example of refusing to be silenced by those grossly in the wrong. The emotional scenes at St George’s Hall last week were a snapshot of a city, red and blue, united in remembrance. But it was also a poignant reminder that this is a truly remarkable city, a city that will continue to remember and celebrate the lives of the 96. It was a reminder that the despicable tarnishing of their memories by supposed powers-that-be will not be tolerated.

Undoubtedly, now that justice has been served, accountability must be tackled, and with a transparency severely lacking from the last inquests. Those whose negligence contributed to this tragedy must be brought to task. Moreover, a similarly pertinent issue that needs to be addressed is how a case of this magnitude, a case that has remained prominently in the national consciousness, has been painstakingly dragged over 27 years. Each year that passed was a year too long for the families to continue suffering in the knowledge that their loved ones were not getting the justice they deserved. Every time Saturday afternoon came around, when the 96 should have been joining their fellow supporters in making the pilgrimage to follow their team, was another week the families were denied closure. Surely, questions need to be asked as to why it has taken such an obscene amount of time for justice to be served. It is imperative these questions are answered, so that such miscarriages are never repeated again.

It is a sentiment echoed by Labour MP Andy Burnham, who has been vehemently vocal in his support for the families’ quest for answers:

“At long last, justice for the 96, for their families, for all Liverpool supporters, for an entire city. But it took too long in coming and the struggle for it took too great a toll on too many. Now those responsible must be held to account for 96 unlawful deaths and a 27-year cover-up. Thankfully, the jury saw through the lies and I’m sure this house will join me in thanking the jury for their devotion to this task and giving two years of their lives to this important public duty. When it came, their verdict was simple, clear, powerful and emphatic. But it begged the question, how could something so obvious have taken so long? Three reasons. First, a police force which has consistently put protecting itself against, over and above protecting people harmed by Hillsborough. Second, collusion between that force and a complicit print media. Third, a flawed judicial system that gives the upper hand to those in authority over and above ordinary people.”

The past week has seen the news that South Yorkshire Police Chief constable David Crompton has been suspended following the inquest amid concerns over his conduct during the case. Though a step in the right direction, it is scant compensation for the years spent and tears shed fighting for justice. It is of paramount importance that the unrivalled determination shown by the families serves as a basis for the manner in which cases of this scale are dealt with to be reviewed. It is vital that their victory signals wholesale changes, so that the unforgivable lies and mistakes, which have dominated this inquest, are never repeated again.

The scenes in Warrington last Tuesday, and in Liverpool throughout the past week, have brought into sharp focus how an extraordinary group of people has refused to lie down and swallow the lies they were fed. The Hillsborough families continued to maintain an astonishing decorum of dignity, and passionately fought for justice in the face of continuous setbacks and ludicrous lies. The conduct of the families during the past 27 years has truly been inspiring, and has served as a shining example of the strength of the human spirit. They have shown the country how the power of a relatively small group of people searching for the truth in the face of ridiculous, wholly avoidable adversity, will finally get it, albeit 27 years too late. The families have ensured justice for the 96, and last week the people of Liverpool helped ensure they will never be forgotten.