Located in Bebington, ‘the most desirable place to live in England’, Ristorante Italia is small and easily missed. But Tony McDonough found it and was pleased he did

I once knew a guy who ran a coffee shop and lived by the maxim that ‘the customer is always right’, a philosophy he hammered home to his staff.

Of course we all know, in reality, the customer is so often not right. In fact anyone who works in the service/hospitality sector will happily tell you that the great British public can be absolutely vile.

Anyway, the guy with the coffee shop learned the hard way that if you force your staff to bottle in their frustrations, even in the face of the most abominable customer conduct, it will eventually result in the mother of all blow-ups and and high staff turnover.

I much prefer the approach of successful Merseyside and Cheshire chef and restaurateur Gary Usher who will defend his staff to the hilt when a disgruntled punter steps over the line. His twitter responses are legendary.

One customer made a fuss on Trip Advisor about staff at one of Gary’s outlets not being prepared to nip out to a nearby shop to get some lemonade to mix with their wine. Gary responded: “We often nip out for people’s requests. It’s part of great hospitality. We just don’t do it if you’re a rude c***.”

Which brings us neatly on to Ristorante Italia in Bebington in Wirral. A survey by Royal Mail found that Bebington, and its CH63 postcode, was the most desirable place to live in England. Their yardsticks were things such as at green spaces, affordable housing and commuting times.

Ristorante Italia is on Bromborough Road, just along from the centre of Bebington Village and also just two minutes walk from Port Sunlight, the ‘chocolate box village’ built by industrialist William Hesketh Lever. It’s elegant houses were built for the workers in his soap factory. He also gave them an art gallery and a theatre. It is truly a wondrous place.

So folks in the area tend to be fairly happy and laid back. On average you will find far fewer ‘kick-off merchants’, as we call them on Merseyside, than in many other places. People in Bebington and Port Sunlight are pretty cool.

However, Ristorante Italia’s manager doesn’t take any chances. She has been there a long time and has a reputation for a non-nonsense approach to the diners. Regular punters know that if you sit where you are told and behave yourself, there’s no problem. Exactly how it should be.

However, on the Saturday evening we show up, there is no sign of our usual host. Cleary having a well-earned night off. It was a busy night and our two young servers were polite and welcoming but clearly very very busy dealing with the weekend throng.

Took a little while to get our drink orders and here is a minor quibble. If you are going to charge £2.60 for a soft drink you might reasonably expect more than a flat Coke served into a small glass from a large plastic bottle. Given how many people will drive to a restaurant, offering soft drinks in individual chilled cans or bottle is surely doable.

As I say, it is a minor quibble, as we come to the food which is always the best part of any visit to Ristorante Italia. We started with insalata caprese, a salad of vine tomatoes, sliced mozzarella and freshly-made pesto as well as the crab e avocado, baked crab and avocado pear in light curried sauce with parmesan.

Insalata caprese is an Italian restaurant staple and it is done well here, well presented with a generous serving of tomatoes and cheese. As simple a dish as this is, it is surprising how many places do it poorly. Not here. 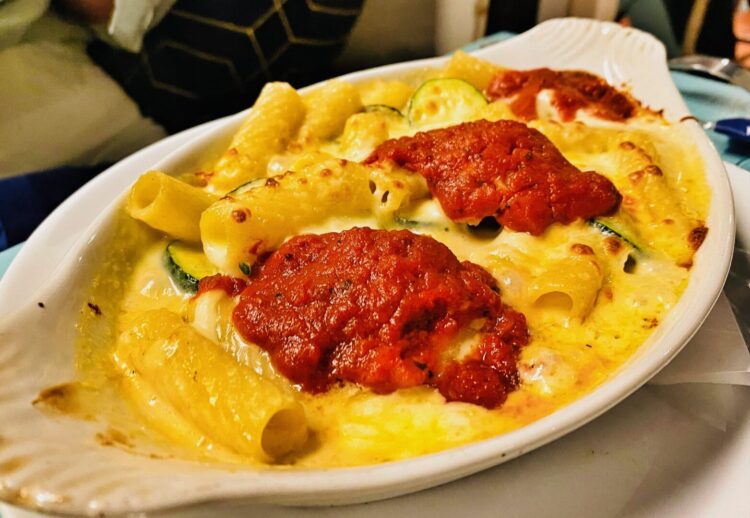 The crab was baked to perfection, the curried sauce light a bursting with flavour. Accompanied by a couple of pieces of Ristorante Italia’s delicious rustic garlic bread, it is a generous enough serving to make a main course if you didn’t want to risk breaking the bathroom scales the next morning.

Mains were equally as generous and well prepared. Maccheroni tricolour offered perfectly cooked pasta in a creamy béchamel sauce with courgettes, topped with mozzarella and tomato and baked in the oven. The sauce was delicious and creamy and was just the right amount to not overwhelm the rest of the dish.

However, the same cannot be said for the sauce on the next dish, the pork Marsala. This offered pork medallions in a rich Marsala wine sauce with mushrooms and a decent helping of potatoes and mixed veg. And rich it certainly was. Tasty for the first few mouthfuls but a struggle thereafter. Pork was cooked well, though.

And it is hard to visit an pizzeria without being tempted by a pizza. Carnivores that we are we went for a meatiest on the menu. Pizza diablo offered spicy sausage, chilli and chicken. The crust on one edge was a little burnt but overall a quality offering which makes me want to try the other pizzas next time around.

Ristorante Italia is a tiny place and, although many drive past it coming off the New Ferry bypass from the Mersey Tunnel, it is easily missed. But it is well worth a visit – you are guaranteed to waddle out feeling well fed. The team is enthusiastic and welcoming and help create a great atmosphere.

Liverpool Summercamp is for grown-ups only