The Liverpool BID Company has announced a £4m programme to deliver the vision of creating a ‘beacon of business excellence’, which aims to build on the successes of the first five years of the Commercial District BID. 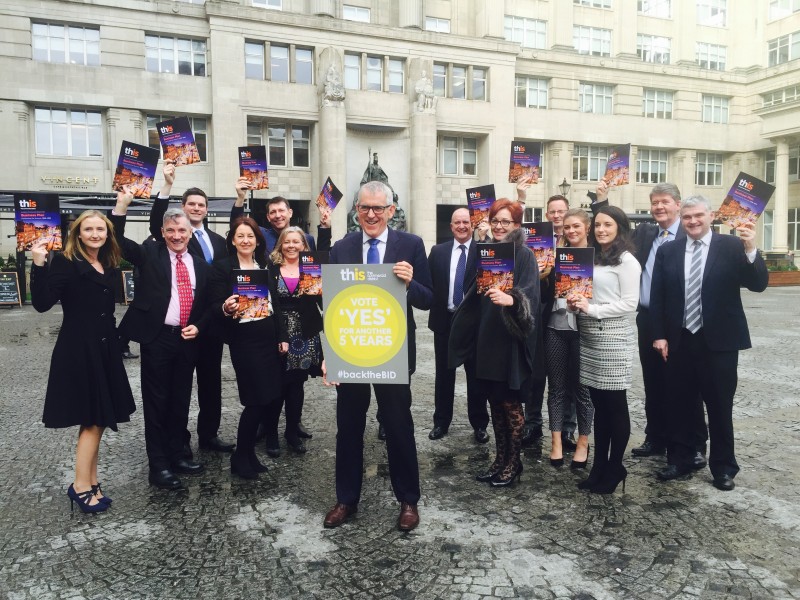 Set out in a 32-page business plan, the BID Company has identified 24 key actions across four key themes to nurture an environment that supports and encourages business growth in a city centre that has just witnessed a record breaking year for construction and office letting.

Key pledges in the plan, which was drafted following a year-long consultation with businesses, include:

Unveiled in front of a packed audience of the city’s business leaders, the launch of the 2016-2021 Commercial District BID Business Plan kick-starts an election process in which 550 businesses will be invited to vote in a month long postal ballot, ending on 17th March.

The event, held in the heart of the Commercial District in The Cotton Exchange, also saw the launch of a #backtheBID re-election campaign (*see Notes to Editors).

The result of the renewal ballot will be announced on 18 March. If a majority of businesses vote yes and the BID also gets a majority of the Rateable Value of those votes, the new five year term will begin on 1 June.

The Commercial District BID, established in 2011, is designed to improve an area from Lord Street to Old Hall Street and Water Street to Pall Mall that contains a workforce of more than 60,000 people employed across a range of booming sectors from creative and digital, legal and financial, to leisure and hospitality.

The Commercial District BID is currently overseeing a £1.6m scheme to improve the public realm in key areas of the district, has just delivered a life-saving campaign with Medicash, ensuring the Commercial District has enough defibrillators for the public to be within two minutes of a device and recently hosted Liverpool’s first themed Restaurant Week.

As part of its support to businesses, the BID also annually provides an estimated £7,000 worth of benefits from free promotional space in the city centre, free first aid, security and customer service training to inclusion on the ThIS Liverpool App, which has now been downloaded by more than 10,000 people.

“The Commercial District is the biggest and most important concentration of business activity in Liverpool and the City Region.

“We want to create a Commercial District fit for businesses now and in the future, with enhanced connectivity, a clean, safe, animated environment and the support to help every business thrive.

“It’s an ambitious plan for an ambitious city and with the backing of our partners and businesses we can make the Commercial District a beacon for business excellence.”

“This business plan is rooted in reflecting the needs of our businesses, identifying opportunities for them to grow and tackling the issues they want addressing in the Commercial District.

“Over the past 5 years the BID has developed a track record of delivering improvements in the city centre which have increasingly grown in scope and scale as we’ve grown to understand its needs. We now have a platform, the confidence and the support of partners to be much bolder in the vision for the next 5 years and position the Commercial District as a major centre for greater investment and growth.

“This is Liverpool’s pre-eminent business community and they need a voice, an advocate and a champion to highlight their role and ideas for the city’s economy, especially as the next 5 years present major challenges not least in the cuts to the public purse and the devolution deal.”

Mayor of Liverpool Joe Anderson is backing the Commercial District BID in its renewal ballot. He said:

“Liverpool city centre needs a vibrant Commercial District and the excellent work the BID Company does is vital to achieving this.

“The city needs organisations like the BID to ensure our business community operates with the right support and in the right conditions to compete, develop and thrive. And for those reasons alone, I’d urge all businesses to back the BID.”