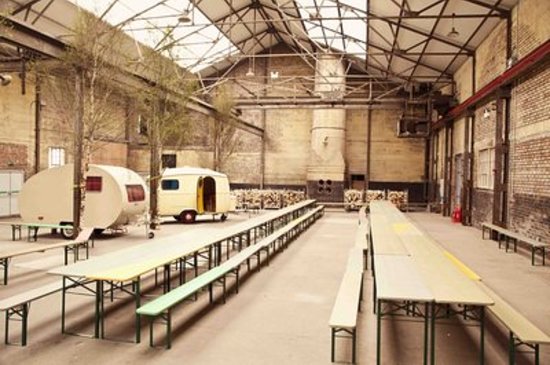 Combining food, drink, design and performance, NIGHTGARDEN debuts at the Greenland
Street venue on Friday October 14 and will run weekly.
Designed to disorientate and delight, nature meets technology head on, as the venue’s Furnace
room is transformed into a ‘glitch forest’, with large-scale video projections sitting alongside
towering trees and verdant plants, creating a playground for drinking and dancing.
Collaborations with some of the North’s hottest culinary talents are set to take eating to the next
level, with headliners already confirmed including Steven Burgess, Robert Owen Brown, and
Manchester’s Real Junkfood Project.
Subversive menus inspired by the changing seasons will shift perceptions of street dining, with
feather and fur featuring alongside plant-based dishes for autumn, as well as foraged ingredients and
reclaimed food waste from supermarkets.
A trailblazer on the Northern dining scene, Mary-Ellen McTague guests at the October 14th
launch, planning a night of reworked historically influenced recipes and cooking techniques in a
menu which includes slow roasted kid goat lasagne with kale, roasted cauliflower yoghurt and
scotch pine.
Before being part of the NIGHTGARDEN project, Mary-Ellen has been sous chef at The Fat
Duck under Heston Blumenthal and Ashley Palmer-Watts, before working on historical R+D at
The Hind’s Head, contributing to The Fat Duck’s Menu.
Mary-Ellen also went on to be Head Chef at Aumbry in Prestwich, which served a contemporary
British menu. She appeared on BB2’s Great British Menu in 2013 and reached the North West
finals.
The chefs from BEASTro follow Mary-Ellen on October 21st and promise a line-up of barbecued
ox heart, short rib bon-bons with burnt tomato puree and charred corn, with sides including crispy
pigs ears and beef dripping roast potatoes.
Sommelier and DJ Adam Speechly comes to the event as the Wine Selector, with over two decade’s
experience of mixing white labels with wine labels.
Against a backdrop of downtempo beats that step up through the night so guests can comfortably
socialise, Adam will be sharing his knowledge on the art of the grape, between dropping tracks in
the wine bunker and connecting with guests from across the decks.
The project also brings together many of the region’s top creative talents. Spacial concept design
and event curation is by Soo Wilkinson, creative director of Igloo Design, who’s previous projects
include Liverpool’s Alma de Cuba and The Lawn Club and The Kitchens in Manchester.
Large-scale visuals and photography are by Reuben Wu photographer, director, and co-founder of
electronic band Ladytron, and Sam Wiehl, artistic director of Liverpool Psych Fest and Abandon
Silence.
Speaking about the new event, a Camp and Furnace spokesperson commented:

“With NIGHTGARDEN we wanted to carve out a new niche and give people something different
to go to on a Friday night. It’s an event that will evolve and change weekly, combining fantastic
menus from well-known chefs with quality drinks and tracks from a wine-loving DJ, in a relaxed
environment that’s accessible to everyone – from the one-after-work crowd to those on a big night
out. It’s the future of Fridays.”

NIGHTGARDEN launches at Camp and Furnace on Friday October 14, and runs weekly from
6.00pm til late. Entry to the event is free, with drinks and food menus available.
No booking is required.
Further information and weekly NIGHTGARDEN line-ups can be found at
www.campandfurnace.com
Share