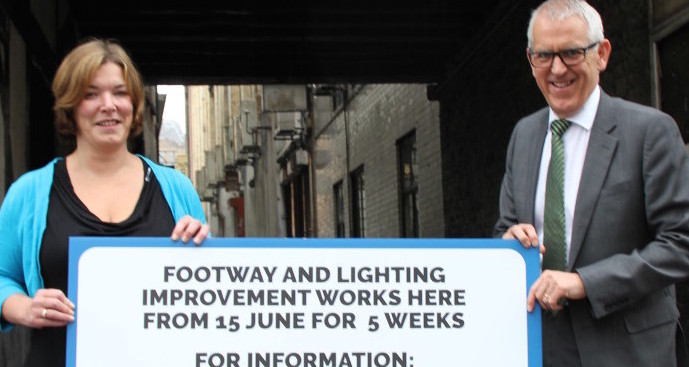 One of Liverpool’s original medieval streets is having a makeover as part of a programme to improve the public realm in Liverpool city centre. The two year-long £1.4 million scheme, which involves improving footpaths, lighting and street furniture, has started this week in the city’s Commercial District.

Leather Lane, which connects Dale Street to Tithebarn Street, is the first of several streets to be upgraded and is now undergoing a 5 week transformation.

The other streets to be improved are (with approximate start dates):

The Commercial District BID has invested £900,000 in the programme. The funding, raised via a 1% BID levy on businesses, has been matched by Liverpool city council who are in addition to invest a further £500k into Water Street in the following year.

“This multi-million investment in the public realm has been a big priority for the Commercial District BID. I’m delighted for the businesses, who will benefit from the upgrade, that it is now underway.

“These improvements will further enhance the appeal of the Commercial District as the place to do business in Liverpool.”

Fiona Hornsby, Licensee at the award-winning Rigby’s, said the investment around Leather Lane and North John Street was hugely welcome.

‘’These kind of improvements are always good for the city centre. Access is a major for any business, especially like ours, so it’s good to know what the works will not last a long time.’’

The public realm programme is part of a wider four year programme of works across the city, which includes a new city centre ‘connectivity’ scheme including new and improved signage and lighting, dedicated coach parking, more priority for pedestrians and cyclists and a review of bus routes to reduce delays (to be delivered from 2017-2019).

“I am very pleased that this work is getting under way. It will make a considerable difference to businesses and other city centre users and shows our commitment to improving  the commercial district.”

The Liverpool BID Company is currently seeking ideas and suggestions from businesses on what they would like to see happen in the Commercial District over the next 5 years. The Commercial District BID is drafting a business plan to develop the district up to 2021. It will be seeking a renewal ballot in March 2016.

Businesses are encouraged to fill in an on-line questionnaire at www.liverpoolbidcompany.com or tweet suggestions to the BID Company using the hashtag – #YourBIDYourSay

A series of Business Plan Workshops are also being held. The next one will be held on 1 July from 8.30am at the Chamber of Commerce on Old Hall Street

Liverpool is Getting Goosebumps