A new public health campaign is being launched – backed by famous Liverpool faces – aimed at encouraging smokers aged 30 to 60 to quit. 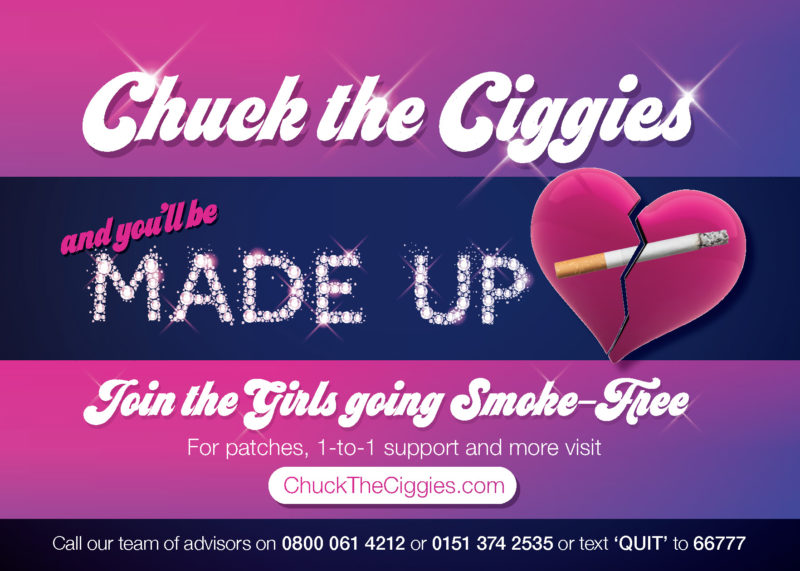 Research by Public Health Liverpool shows that men and women in this age group want to give up smoking but lack confidence – so now they are being targeted in an online drive to let them know that support is available to give up.

Smoking accounts for almost 1,000 deaths every year in Liverpool and 25 percent of people in the city smoke.

In the new campaign:

Men are being targeted through the ‘Kick the Ciggies’ campaign at http://kicktheciggies.com/ focused around football which features Everton Football Club, along with Liverpool FC legend Jamie Carragher offering encouragement on the game plan and tactics needed to give up.

Women will be urged to ‘Chuck the Ciggies’ at http://chucktheciggies.com/ which features local actress and presenter Gemma Brodrick and a series of films with local women Danielle, Amy, Ginny, and Hilary who all quit smoking, sharing their tips and advice and giving encouragement.

Both sites will direct people towards Smokefree Liverpool, a free service in the city which already helps around 250 men and women a month give up smoking through one to one support and access to medicines that fight cravings.

Councillor Paul Brant, Cabinet member for health, said: “Smoking is one of the biggest killers in Liverpool and all the evidence shows that quitting is the biggest thing you can do to benefit your health.

“What we are trying to do here is break down a few barriers and show people that they are not alone and there are lots of different types of support out there to help them quit.

“It is also good for your pocket as well as your health, as people who give up smoking save an average of around £2,000 per year.”

Dr Sandra Davies, Liverpool’s Director of Public Health, said: “Signing up to quit smoking is one of the best things you can do for your health and this campaign is designed to target those people who, for one reason or another, lack confidence quitting.

“We know that the vast majority of smokers in Liverpool are keen to quit and our message is that there is lots of support to help you through the process. There is a whole range of advice that we offer ranging from face to face to over the phone and text or email. We’ll work with you to come up with a quit plan suited to your needs.”

“Even if you have tried unsuccessfully to stop smoking before, it doesn’t matter, sooner or later you will be successful if you have the right support.”

People wanting to give up smoking can also get in touch with Smokefree Liverpool in the following ways: