Built in 1901 to store shipments of tobacco, the Grade II-listed complex already houses the Titanic Hotel and will now see 200 apartments created in a £130m project. Tony McDonough reports

Developer Stanley Dock Properties is offering a first glimpse at the luxury apartments being created at Liverpool’s landmark Tobacco Warehouse in the north docklands.

Built in 1901 to store shipments of tobacco, the Grade II-listed building remains the the largest brick warehouse in the world and is being carefully restored and converted into a £130m residential development.

The first phase of almost 200 apartments will be completed in 2020, with some units ready for occupation in the first half of the year. Stanley Dock Properties is the company behind the neighbouring Titanic Hotel & Rum Warehouse.

Ahead of the official sales launch in January, the firm has released new images of the luxury two and three-bed apartments.  They show how the warehouse’s original architectural details have been preserved, including exposed brick walls, cast-iron structural columns, concrete ceiling beams and a unique two-floor layout, reminiscent of New York ‘loft living’.

The duplex layout provides double-height living areas and open-plan layouts. Prices start at £225,000, with the average apartment size approximately 1,400 sq. ft, roughly double the size of a standard apartment on the market.

Amenities include a 24-hour concierge, secure parking, an inner courtyard garden, residents’ lounge and an entrance lobby. On the ground floor, there will be up to 100,000 sq ft of retail and commercial space for shops, restaurants and offices.

Plans have also been revealed to create a pedestrian walkway encircling Stanley Dock, which will be open to residents and guests. At more than 1.5m sq ft the project is one of the largest industrial conversion in UK history.

The developer says there has already been significant interest in the apartments, with marketing agent Logic Estates receiving more than 2,500 registered enquiries. 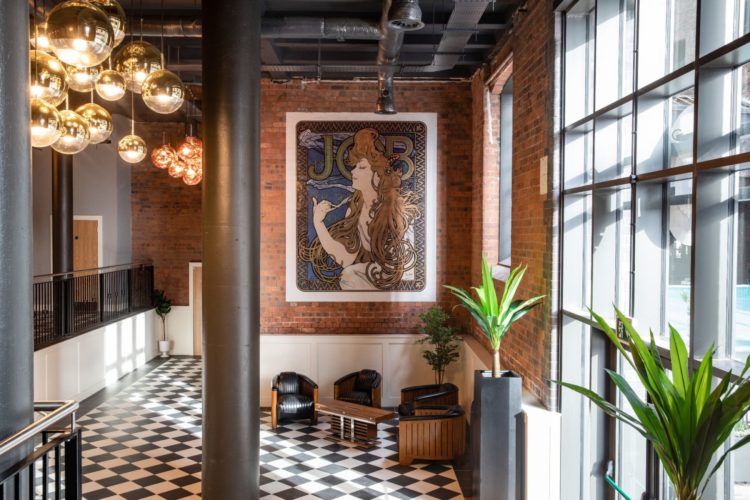 Pat Power, director at Stanley Dock Properties, said: “We’re passionate about preserving the essence of this incredible building’s past while repurposing it for a long and prosperous future.

“We’ve had a huge amount of interest from potential buyers and we’re so pleased to announce that the first apartments will be ready for occupation in 2020. Each apartment has been designed to offer a bright and open-plan living space, with many offering stunning waterfront and skyline views.

“Stanley Dock is at the heart of Liverpool’s next major regeneration zone. The redevelopment of Tobacco Warehouse will iadd new life into an area which is steeped in history and memories of the maritime heritage that the city was built on. This is already evident in the adjacent multi award-winning Titanic Hotel & Rum Warehouse.”

Mariah and The Beatles to feature in the Liverpool Light Spectacular