Younger than Madonna but eats crisps and likes wine, too young to die, but too old to stand near the edge in case she gets dizzy and falls over, professional Grumpy old woman Jenny Eclair announces How to Be a Middle Aged Woman (Without Going Insane), a brand new show and tour which stops off at St George’s Hall’s Concert Room on Wednesday 9th November. 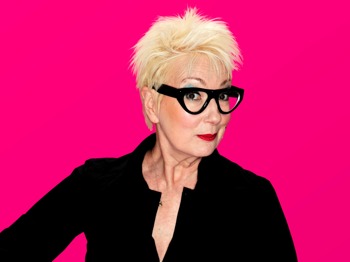 Tackling questions such as, is swearing better than crying, HRT or boxercise – you decide, Jenny takes to the stage to explore some of the issues that surround the ageing process. Why are so many young people idiots, is Chardonnay medicinal, and how many episodes of ‘Bake Off’ does it take to lower your blood pressure? Watch a woman, happy to have lost her dignity years ago, lob a few grenades back in the face of ageism. Semi –bearded and suffering from outbreaks of gout and hysteria, Jenny puts middle age under the microscope and decides whether to laugh, cry or buy a dachshund!

Jenny Eclair has been a stand-up comic since the last millennium; she was the first woman to win the coveted Perrier Award and hasn’t stopped banging on about it ever since.  Apart from the stand-up she is an acclaimed writer; her fourth book Moving was released in 2015 to critical acclaim and charted in the Sunday Times Best Seller List. Previously Jenny has co-written and starred in Grumpy Old Women Live 2: Chin Up Britain on Tour in London’s West End and has starred in a number of other West End productions, including Steaming, Mum’s The Word and The Vagina Monologues.  Jenny came third in I’m a Celebrity Get Me Out of Here (ITV1) has presented on Loose Women (ITV1) and has done ‘acting’ on Holby City (BBC One) and Skins (E4).  Other television credits include: Splash (ITV1), Celebrity Masterchef (BBC One), The Apprentice: You’re Fired (BBC Two), That Sunday Night Show (ITV1), The Chase: Celebrity Special (ITV1), Antiques Road Trip: Children in Need Special (BBC Two), Celebrity Fame Academy (BBC One) and Let’s Dance for Sport Relief, (BBC One), where she reached the final. Jenny has hosted her own show on LBC radio, and is a regular contributor on shows such as BBC Radio 4’s Woman’s Hour, Just a Minute and 7 Day Sunday (BBC Radio 5 Live).

Jenny Éclair: How to Be a Middle Aged Woman (Without Going Insane)

Not suitable for under 14s, parental guidance strongly advised