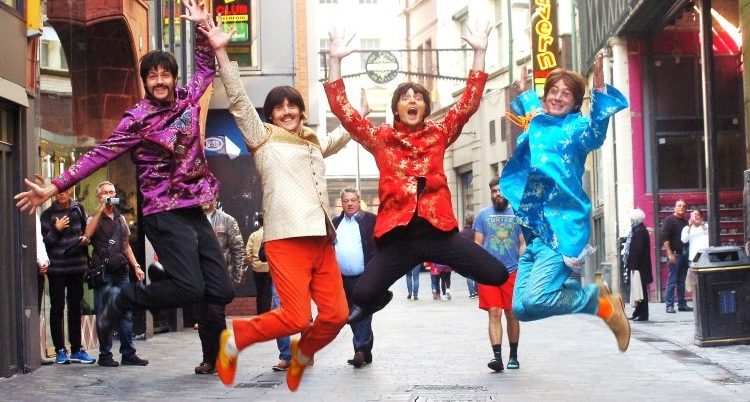 Over 100 guests Come Together for the launch of the International hit show Let It Be at Liverpool’s Hard Days Night Hotel yesterday, 8th September. 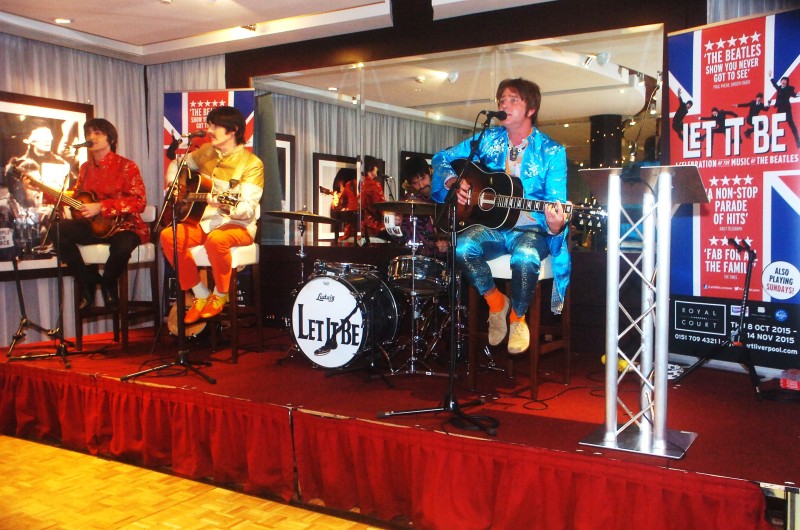 They had plenty to Shout about when producer Jeff Parry from Annerin Productions, announced the names of the brand new cast who will play the Fab Four in the hit Beatles show. Paul Canning will play John, with Emanuele Angeletti as Paul, Luke Roberts as Ringo and John Brosnan as George. They performed a medley of hits for the city’s media and VIP’s.

The show which celebrates the music of The Beatles comes to their hometown in just four weeks’ time to mark the official re-launch of the multi-million pound refurbishment of the Royal Court Theatre in Liverpool. Direct from London’s West End, Let It Be will run for 5½ weeks from Thursday, 8th October – Saturday, 14th November 2015. The opening is also set to coincide with John Lennon’s 75th birthday which falls on Friday, 9th October.

The smash hit show that established itself as one of the West End’s most popular shows when the production originally opened at the Prince of Wales Theatre in September 2012, where it recouped its initial investment after just 18 weeks before transferring for a year-long run at the Savoy Theatre from January 2013 – February 2014. The show has recently returned to the West End for an 8 month run at the Garrick Theatre.

Seen by over 1 million people worldwide, Let It Be continues to delight audiences across the globe, having recently performed to audiences in Germany, Japan, Moscow, and France. Let It Be showcases the music of the world’s most successful rock ‘n’ roll band, in a spectacular concert charting the band’s meteoric rise from their humble beginnings in Liverpool’s Cavern Club, through the height of Beatlemania, to their later studio masterpieces.

The show is packed with over forty of The Beatles’ greatest hits including: Twist and Shout, She Loves You and Drive My Car, as well as global mega-hits Yesterday, Hey Jude, Come Together and, of course, Let It Be. Travel back to the magical sixties when all you needed was love, and a little help from your friends!

The music defined a generation, captured the hearts and ideals of millions, and now you can relive the memories in the city where it all began as Annerin Productions bring Let It Be to Liverpool.

“I could not have dreamed as a nine year old living in Canada, having received my first Beatles album that I would be producing a show about the band in their hometown 51 years later. Destiny has some strange coincidences.

“Having been a Beatles fan since a young age I studied the origins of the Beatles and Liverpool. I have visited Liverpool many times, most recently when ‘Let It Be’ played at the Empire Theatre. I was overwhelmed with the Liverpudlians show of support and thanks to me for being part of the creation of the West End show. To say the least, ‘Let It Be’ is helping to keep the music of the Beatles alive throughout the world and I am honoured to be bringing the show back to Liverpool.”

The show will officially launch the completion of a £2.8m refurbishment of the Royal Court. This will give audiences the chance to see the new foyer, box office, circle bar and terrace. There will also be improved access with a lift to all floors.

To book tickets call Royal Court Liverpool on 0151 709 4321, online at www.royalcourtliverpool.com or in person at the Royal Court Box Office from 10am to 6pm, Monday to Saturday. (Booking and handling fees may apply)

Tickets can also be purchased from TicketQuarter on 0844 8000 410 online at www.ticketquarter.co.uk or in person at Queen Square, Liverpool City Centre. (Booking and handling fees may apply)

Shankly Hotel coverage worth in excess of £1million

From Liverpool With Love – fundraising concert from Capital of Kindness