The Liverpool BID Company commissioned lighting experts The Christmas Decorators, who recently decorated the Aspen home of the Oscar winning Hollywood legend, to add some sparkle in the evening. 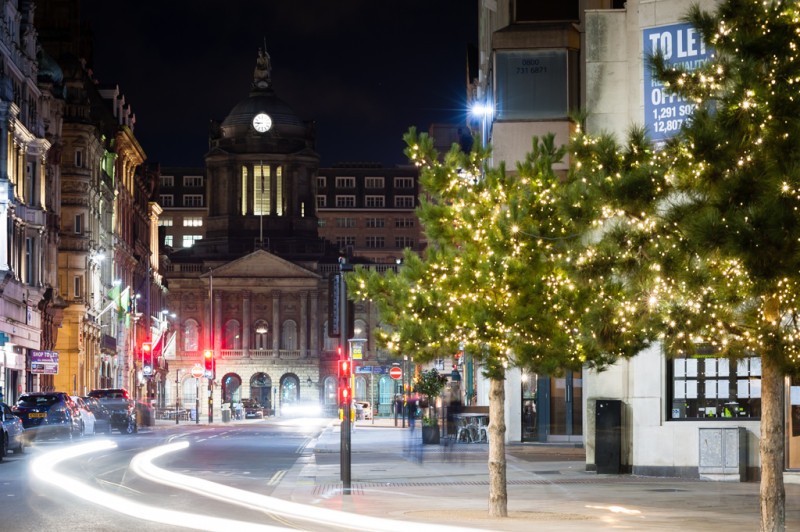 Building on from new lights introduced for the Christmas season, more than 80,000 lightbulbs have been fitted to 40 trees in the City Central and Commercial District BID areas – with a scheme unique in the UK.

The Liverpool based firm, which has also decorated Europe’s best Christmas tree and Bethelem’s Manger Square, have used a painstaking branch wrapping technique to highlight the shape of all the trees on Church Street, Lord Street and Williamson Square in the retail core of the city centre, and Derby Square and Old Hall Street in the Commercial District.

Each tree holds an average of 2,000 LEDs that were specially designed for the city centre, which was recently awarded Purple Flag status for its safe and vibrant night time economy.

“They are 2 chip lights, something that no other city in the UK has. Each of the bulbs has 2 LED chips inside it, one in traditional yellowy white and the other the frosty looking ice white.  At the moment the trees are all set to warm white and come Christmas, at the press of a button, they will all change to ice white.”

A commitment to create new lighting schemes is one of 24 key pledges in the new 2016-2021 Commercial District BID Business Plan, which 550 businesses are now voting on in a month long post ballot that ends on Thursday, 17 March.

Tracey Crosbie, Events Manager for Liverpool BID Company, which is overseeing the renewal ballot of the Commercial District BID, said:

“Businesses have been asking for a lighting scheme that is year round so we wanted to do a scheme that had real impact.

“The Christmas Decorators are world leaders in their field and we’re delighted they’ve given the city a design unique in the UK, that not only enhances the beauty of the city centre but are also cost efficient and good for the environment.’’

“It’s always nice for friends and family to see what we have achieved in our city especially after decorating such iconic locations around the world.’’