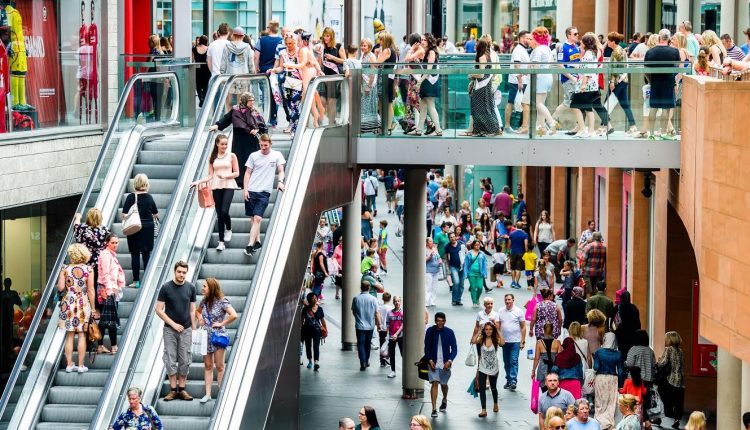 Liverpool’s title as one of the UK’s leading retail destinations was further reinforced today as new figures show more shoppers are hitting the city’s high street than ever before.

Liverpool ONE at the top again

Following a bumper bank holiday weekend, which saw rafts of shoppers heading to the shops despite bad weather throughout, Liverpool ONE has today reported a significant increase in footfall numbers.

This includes an increase of one million customers visiting the multi-award winning shopping and leisure destination compared to this time last year (6.5 per cent increase).

Liverpool ONE has seen a consistent rise in visitor numbers since its launch in 2008, seeing a total of more than 155 million shoppers during this time.

The news comes as declining footfall figures are reported in towns and cities elsewhere across the country.

The latest figures from the British Retail Consortium (BRC) show the number of shoppers visiting stores during July is down by 0.6 per cent.

These include Argos, which chose Liverpool ONE for its first digital concept store in the North West, and national restaurant chain Bill’s, which launched its second site in the region and its North West flagship store earlier this month.

Further new arrivals include premium audio specialist Bose, which has also chosen Liverpool ONE as the location for its first store in the city.

“We’ve had a tremendously strong year so far and it is with great pleasure that we announce these incredible results.

“The Liverpool ONE team prides itself on bringing the best to our customers. I firmly believe that the variety and high quality stores and facilities at Liverpool ONE has played a major part in Liverpool achieving this fantastic result.

“So far this year, we’ve welcomed some more impressive big name brands, hosted some fantastic events, and are continually strengthening what we have to offer to our shoppers.

“Liverpool has had the opportunity to host some incredible world-class events this year, such as the International Festival for Business 2014 (IFB), Giant Spectacular and Biennial.

“These figures demonstrate that, while the spotlight has been on the city, our retailers have been at the forefront in welcoming the thousands of guests we’ve seen.

“It’s fantastic to see that Liverpool’s retail offering is, once again, leading the way across the country. We should all take a huge amount of pride in this achievement.”

Commenting on the brand’s arrival to Liverpool ONE, Scott Macdonald, Co-Managing Director of Bill’s, added:

“We are very excited to be opening in Liverpool ONE and confident that the addition of a Bill’s restaurant will add something a little different to the already diverse mix.

“As we are open from early in the morning until late at night, it’s important we choose locations that will deliver customers and Liverpool ONE is ideal for us, with its growing footfall of local and international customers throughout the day.”

The announcement follows a hugely successful few months for Liverpool ONE. In July, it reported a massive upsurge in sales.

Further figures from the BRC also revealed that while retail sales nationally had fallen by 0.8 per cent in July, Liverpool ONE sales have bucked the trend and increased by 6.7 per cent.

A new chapter for the Giants