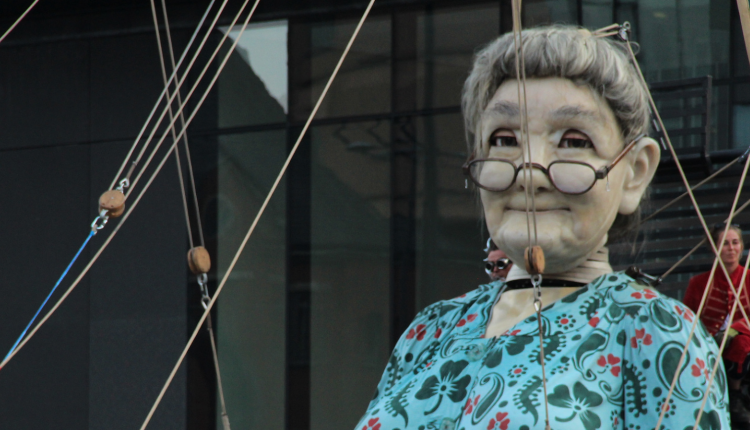 A new chapter for the Giants

A special book is being produced to re-live Liverpool’s memorable giant five days.

Due to popular demand, Liverpool City Council has commissioned a book which is set to contain more than 100 beautiful images of Memories of August 1914 – the UK’s flagship 2014 World War One commemoration event which took place from 23-27 July.

The event saw the Grandmother giant having a sleep in St George’s Hall before waking up and exploring the streets of Liverpool with the Little Girl Giant and her pet dog Xolo.

With crowds of hundreds of thousands attending each day of the spectacular, the city council is encouraging anyone who thinks they’ve got a fantastic or unique photograph to submit it to the Giants Team for the chance for it to be included in the final publication.

A DVD will come free with the book and images submitted may also be used in the film.

In order for the image to be considered:

No payment will be given for any of the images provided, but the photographer will be credited in the book.

Anyone who wants to share their photographic gem, should email the image to liverpooldigitaldesk@gmail.com with the subject line ‘Giants Pictures’ by 5pm Sunday 7 September 2014. The email should include the person’s full name and contact number.

“Ever since the giants sailed away, we’ve had a huge amount of people asking if we are producing a film or book so we’re delighted to be able to say yes to both!

“We produced a book following the success of the first giants’ visit, Sea Odyssey, in 2012 which sold a massive 2,000 copies in the first month and we had to order 1,500 more to meet demand.

“I’m sure we’ll get a huge response to our call out for photos to include in the book, and the team will be spoiled for choice. It’s a great chance for people to share their favourite photographic moments and potentially have their handiwork on display in this very special keepsake.”

The official book and DVD are expected to be ready for purchase in October, and will cost £9.99.

Copies can be pre-ordered until Sunday 7 September and will cost £6.99, saving 30%. To order visit www.giantspectacular.com and click on merchandise.

The book will be produced in partnership with Trinity Mirror and Royal de Luxe.