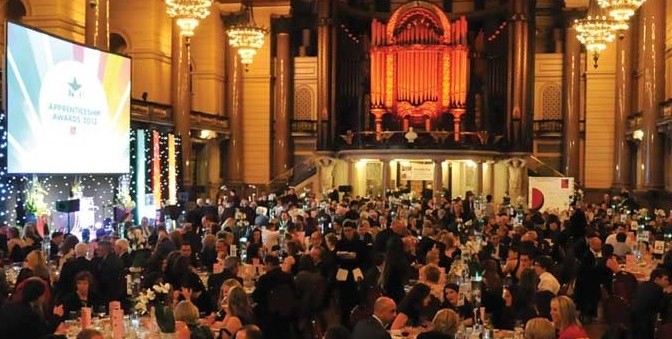 On Thursday evening, Liverpool hosted the National Apprenticeship Awards for Cumbria, Lancashire and Liverpool. The event, now in its eleventh year is a ceremony that celebrates the achievements of apprentices across the region and is being sponsored by the City of Liverpool College.

Elaine Bowker, Principal of the City of Liverpool College said:

“The awards are a way of showcasing the real value that apprentices bring to business and the vital role they play in both developing a skilled workforce and giving individuals their first step on the ladder of a successful career.”

The awards, which were held at Liverpool Town Hall were organised by the National Apprenticeship Service to recognise excellence in two main areas: businesses that grow their own talent with apprentices and apprentices who have made a significant contribution to their workplaces .

There is also an employer category open to employers of all backgrounds and operations who have demonstrated their involvement with apprenticeship schemes and shown how they have benefitted their organisation.

The Apprentice of the Year awards will honour those who have recently completed their apprenticeship or who are currently working towards it.

Additionally, there is a City & Guilds Apprenticeship Champion of the Year category. This is open to former apprentices who can demonstrate how they have used their experiece to further their careers and display real progression.

In keeping with the nature of the awards, the City of Liverpool College also provided the food and drink at the reception working with students currently undertaking their catering qualifications.

Knowsley attempts to raise its profile with new marketing scheme