Latest figures from Deloitte show the ‘COVID effect’ on Premier League clubs is over as they spend £295m on players during the January transfer window – the second-highest figure ever. Tony McDonough reports

Premier League (PL) clubs spent £295m on players in the January transfer window – the second-highest for the period in the division’s history.

In January 2021, still in the midst of the pandemic, PL clubs spent just £70m and this year’s figure is more than four times higher. However the gross figure for this window is still well below the record of £430m set in the 2017/18 season.

Figures from accountant firm Deloitte show expenditure (player purchases less player sales) for PL clubs during January was £180m. This is the highest-ever figure since the January transfer window was introduced in 2003.

Both Liverpool and Everton were busy during the window. Attacker Luis Diaz joined Liverpool from Porto in a deal initially worth £40m. The Anfield outfit also saw Nat Phillips and Neco Williams join Bournemouth and Fulham respectively in loan deals. Liverpool spent just £1.6m in January 2021.

There was also movement over at Goodison Park where, in the last few days, Frank Lampard has taken over as manager, replacing Rafa Benitez. Vitaliy Mykolenko joins from Dynamo Kiev for £21m, Scotland right back Nathan Patterson comes from Rangers in a £12.6m deal. 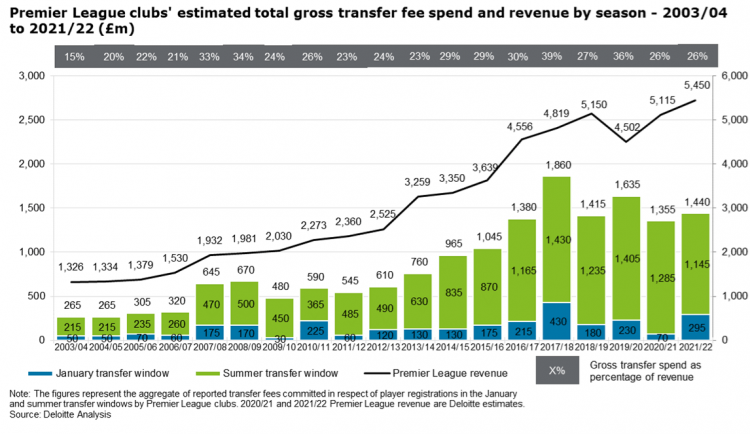 Premier League gross spend for the 2021/22 season totals £1.4bn (combining summer 2021 and January 2022 transfer windows). This is around £85m higher than total gross spend in the 2020/21 season and is the third highest gross spend in a single season ever.

The five clubs currently at the bottom of the Premier League spent £150m in this year’s January transfer window, more than 50% of the total expenditure. Gross spend among these clubs is up £145m on that of clubs in the same position during last year’s January window, which contributed just 7% (£5m) of the overall total.

Dan Jones, partner and head of the Sports Business Group at Deloitte, said: “This transfer window indicates that the financial pressures of COVID on Premier League clubs are easing, with spending firmly back to pre-pandemic levels and remarkably among the highest we’ve ever seen in January.

“Other large European leagues are also edging back to higher spending, but it is Premier League clubs that have notched up the largest total spend in this transfer window, spending almost £150m more than Serie A clubs, the closest competitor.”