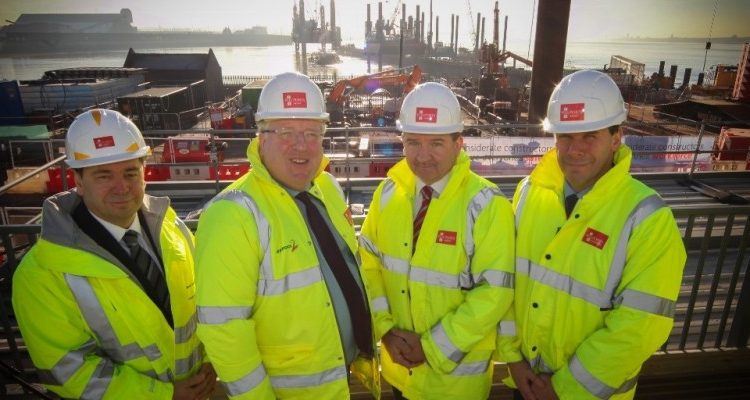 Peel Ports, operators of the Port of Liverpool, welcomed the Right Honourable Patrick McLoughlin MP, Secretary of State for Transport and the Mayor of Liverpool, Joe Anderson, to view progress on the Port’s £300 million expansion project. 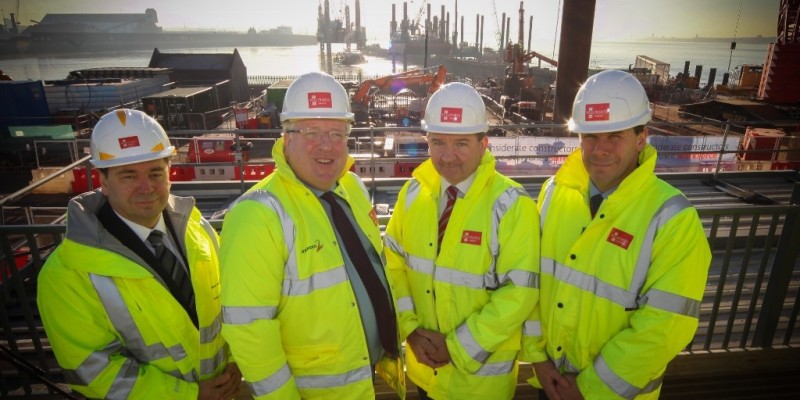 Construction is well underway on what will be Europe’s first semi-automated container port.  On completion, the new Liverpool2 terminal will be able to accommodate the world’s largest deep sea container vessels.

“Our record investment in Liverpool’s transport network is a huge boost to its economic growth, driven by the city’s maritime and business ambitions. Improved port, road and rail connections will link people with thousands of new jobs in the region and encourage businesses to grow. This government continues to build the infrastructure across the country that will deliver our long-term economic plan.”

“We welcome the Government’s financial commitment to upgrading the road network in and around Liverpool.  This will further improve access between the port and the motorway network.

“We are investing to grow the port significantly and believe that Liverpool will increasingly be seen as a preferred option as cargo owners discover the benefits of delivering their products and goods much nearer to their end destination. Liverpool’s location at the heart of the UK offers a distinct advantage, with over 65% of the population of the UK and Ireland living within a 150 mile radius of the city.

“Having a more integrated transport infrastructure in place to be able to carry freight inland across the UK’s heartland will enable faster, more efficient and more environmentally advantageous delivery.  The investment will drive jobs and deliver international trade to the very centre of the UK – that represents a huge opportunity to develop the concept of a northern powerhouse and help to rebalance the UK economy.”

The Port of Liverpool is connected to other parts of the UK by 10 motorways within a 10 mile radius, numerous rail connections and the Manchester Ship Canal. The largest volume and density of large warehousing (over 97k sq ft / 9k sq m) of any UK region is located within a 70 mile radius around Liverpool. The Port provides direct connections to Southampton, Rotterdam, Antwerp and Le Havre via Peel Ports’ own and third party feeder operators.

Ships on the Mersey and high and low tides on Monday, August 15

Ships on the Mersey and high and low tides on Sunday, August 14