Liverpool St George’s Hall has launched the most exciting tour yet to hit the city and, make no mistake, this voyage is not for the faint of heart…! 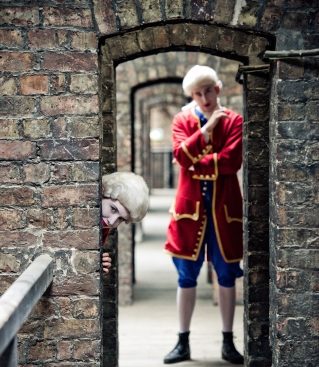 Tickets for The Footman Tours have been in such high demand that tours have had to be continually added. What started off as a one-day tour has now been extended to every Saturday and Sunday until the end of October.

The management at St George’s Hall are delighted with the response and shows the Liverpool peoples fascination with the heritage of their city.

Ever been to St George’s Hall and wished you could explore the nooks and crannies that aren’t normally open to the public? Well, now’s your chance!

For the first time in over 160 years, visitors are invited to discover the magnificent Grade I listed building’s hidden depths and unseen places – from the old rickety wooden structures of the dark corridors above The Great Hall, down to the recently discovered lost tunnel below.

Join the Hall’s time-travelling footmen, dressed in Georgian costume who will lead the tour while entertaining and engaging their audience with fascinating stories about the development of the city dating back to the 1830s and bring to light the mysterious tales of what truly lies beneath our feet.

St George’s Hall is widely known for Its historical significance in Liverpool and its ‘Lost Tunnels’ are said to date back to the origins of the Hall where the original architect Harvey Lonsdale Elmes had to brick up the tunnels in 1838 at a cost of £300.

“Many of these tunnels are believed to form the hidden subterranean passages beneath the Hall and may even join networks of tunnels throughout the city.

“This tour will reveal these passages beneath our feet carry that carry with them many unsolved mysteries, from hidden structures to darker tales of the tunnels being a place of torture and worship.

“This is a magnificent discovery and again places St George’s Hall at the forefront of Liverpool’s undiscovered heritage.”

This amazing and historic discovery has yet again captivated the curiosity of those who love to delve below the surface of Liverpool’s fascinating and mysterious past. And The Footman Tours are a must see for anyone interested in the hidden history of the city.

It is by far, the most exciting journey through the city’s history and an exciting expedition through the hidden areas of the building!

Each tour will run for 1hr 30mins after which guests will enjoy a Footman Afternoon Tea Package in the Heritage Centre and enjoy the atmosphere and hospitality in one of Liverpool’s most prized possessions.

Please note, this is not an average walking tour and you will require a level of fitness and agility as you weave your way through the steep and narrow passageways, the rickety roof top structures and the long winding staircases.