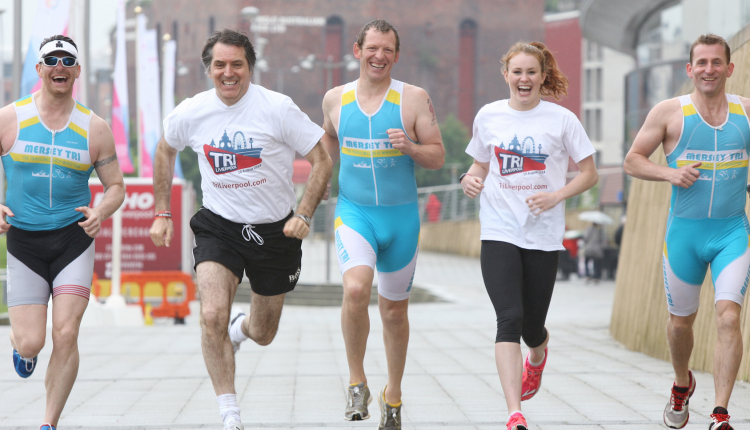 Over 1,000 triathletes, including celebrity participants and some of the world’s best, today took part in Tri Liverpool – Liverpool’s dockside triathlon event.

The event, which is organised by Lagadere Unlimited Events and British Triathlon in partnership with Liverpool City Council, saw competitors compete from 7am right through the day in front of spectators who battled the elements to cheer on participants.

The event saw some of the world’s best triathletes compete in the elite races in the afternoon for both male and female competitors, among them world no1 female triathlete Gwen Jorgensen.

It wasn’t all experienced triathletes however, as Tri Liverpool also welcomed an abundance of first timer triathletes as well as a whole host of celebrity participants. Former Big Brother winner and current 60 Minute Makeover presenter Craig Phillips took on the sprint distance event (750m swim, 20km bike, 5k run) in what was his first ever triathlon. Speaking after the event, Craig Said “I love that it took place right in the city centre of Liverpool, and we even got in the docks – I’d never been in the docks in my life before today! It was a hard challenge doing all three parts of the triathlon – my target was just to finish in one piece so I’m happy!”

There was also a bit of light hearted competition in the Team Relay event, as ‘Team Liverpool MP’s’ went head to head against ‘Team Hollyoaks’. The Team Liverpool MP’s was made up of Andy Burnham (swim), Steve Rotheram (bike) and Luciana Berger (run) whilst Team Hollyoaks was made up of Nikki Sanderson (bike) and James Sutton (run) and a member of local triathlon club Mersey Tri who kindly volunteered to take on the swim leg for them.

Steve, who recruited the MP’s to participate, said:

“It wasn’t difficult at all getting the team organised. Andy (Burnham) got first dibs. I think swimming is the easiest so that’s why Andy went for that option.” He continued, “Tri Liverpool is a great event, but it’s the cityscape which is the backdrop to what you’re doing, that makes it so special. Andy did the swim in the dock and then I did the cycle – it’s great to see all the iconic buildings. And Luciana finished off doing the 5k run with all the crowds that are gathered at the finish line.”

“I was really excited to take part in Tri Liverpool. I’ve done marathons before but never a triathlon, so it’s a great thing to be able to tick off and say I’ve done part of it. It’s been a really good day, and it’s been brilliant to be part of a Hollyoaks team with James Sutton.” Nikki’s sentiments were supported by Andy Burnham MP who commented “It was fantastic! What a thing to be part of, swimming past these buildings where I’ve been all my life. I’ve never been down beneath them in the water though, so it’s a brilliant thing. It’s a great feeling to get the encouragement from the crowds. People come out in all weathers here, and they have done today. Well done to the organisers, fantastic event and the feel-good factor is around. It’s something we hope is a permanent fixture in Liverpool.”

“What a fantastic day! Liverpool proved once again it excels when it comes to hosting high profile, sporting events. I would like to congratulate all those who took part and it was great to see the crowds come out and support the competitors as they undertook such a huge athletic challenge.

“I’d also like to thank the team who have worked so hard behind the scenes to make it such a safe, enjoyable and successful event for all involved.”