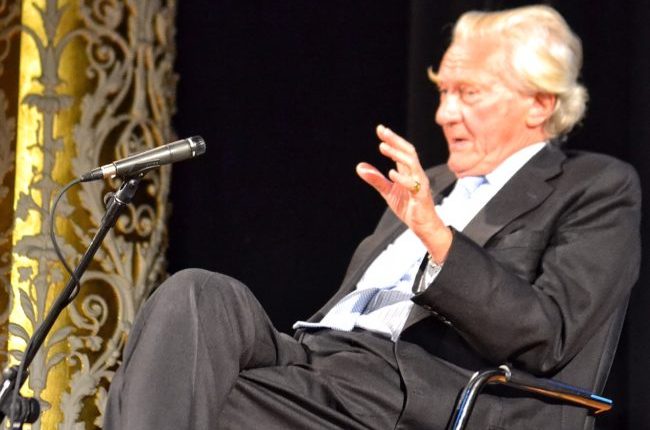 UK will survive Brexit, Hezza tells Liverpool audience, but there will be ‘a price to pay’

Former Minister for Merseyside, who helped kick-start the city’s renaissance following the 1981 Toxteth riots, stuck to his view that Brexit was against ‘Britain’s self-interest’. Tony McDonough reports.

Britain will not be “submerged beneath the economic waves” created by Brexit, Lord Heseltine told a Liverpool audience, but warned we would have to “pay a price” for leaving.

The former Minister for Merseyside, who helped kick-start the city’s renaissance following the 1981 Toxteth riots, also stuck to his view that Brexit was against “Britain’s self-interest”.

Hezza was the keynote speaker at a day-long event – UK Cities, Universities and Businesses in Europe after the Referendum: Risks and Opportunities – held at the city’s Maritime Museum.

It was organised by Professor Michael Parkinson, executive director of the University of Liverpool’s Heseltine Institute for Public Policy and Practice.

Lord Heseltine told those assembled: “The fact is we are in a serious period of uncertainty.

“Britain is not going to be submerged beneath these economic waves. Britain will be here, Liverpool will be here, but there will be a price to pay for that uncertainty in decisions that are at best delayed and, at worst, completely changed.”

Speaking in Liverpool prior to June’s EU Referendum Hezza had claimed a vote for Brexit would be a “kick in the crotch for Merseyside”.

At today’s event he said he could not possibly have known how Liverpool would change following his work spearheading the post-riots taskforce in the early 1980s.

He added that same “not-knowing” now applied to the UK’s immediate prospects following the Brexit vote.

To laughs from the audience, he said: “I happen to believe Theresa May was right to put the three principle Brexiteers in charge of renegotiation – working on the basis that they know what they are doing.”

Considering Brexit, looking at the election of Donald Trump, and ahead at the upcoming French and German elections, Lord Heseltine remarked that if “people have frozen living standards for a long period of time… they want change” and if the “irritant” of immigration is thrown in “you get a toxic mix”.

He said that public opinion is “not static” and “might change” as the uncertainty continues, wages stagnate and the currency continues to be devalued.

He pointed to the by-election in David Cameron’s old seat of Witney, which saw a huge 20% swing to the “European party” – the Lib Dems – and the upcoming Richmond by-election as new “tests of public opinion”.

Lord Heseltine added that if the French and Germans elect right wing parties, the right to freedom of movement may be diluted resulting in many “questioning what the main motivation for leaving is in the first place”.

Recalling growing up in a culture where “the assumption was that war followed war” Lord Heseltine said his own position is “totally clear”.

He said: “I’m in favour of Europe for one simple, easily explained reason – because I think it is in Britain’s self-interest.”

Special report: Why is Liverpool struggling to attract and retain the brightest graduates?