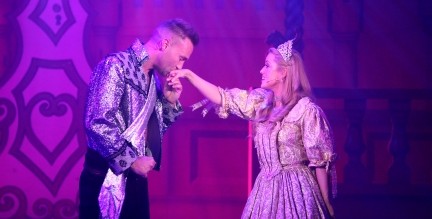 Hunky male model and TV star Calum Best had hearts racing and the audience swooning in the aisles at the packed out press night of Cinderella on Monday night. 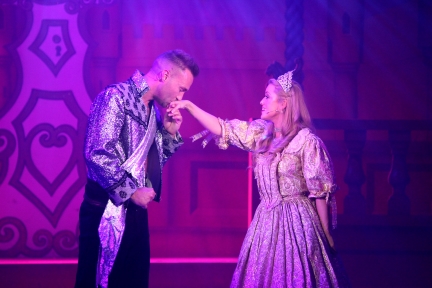 Members of the press and local celebrities and VIPs came to The Epstein Theatre to see model and son of football legend George Best, cut a dash as the handsome Prince Charming in LHK Productions’ pantomime.

The cast also included Grease Is the Word’s Alison Crawford as Cinderella and Lesley Butler who proved to be a force to be reckoned with as the Wicked Stepmother.

Michael Chapman and Tom Burroughs provided laughs aplenty as the hilarious Ugly Sisters. Meanwhile, 16-year-old Lewis Pryor had the audience in the palm of his hand as cheeky chappy and Cinders’ best chum, Buttons.

But the real stars of the show were the children of the audience who were invited onto the stage by Ugly Sister Michael Chapman to sing Old Macdonald Had a Farm, but these tots had other ideas… not forgetting the adorable Shetland ponies.

Returning to the Epstein Theatre for his fourth festive season, producer Lee Kelly, was thrilled with the turn out for press night and the audience’s reaction to the panto.

“I am delighted with the response to Cinderella press night. We had a full house and the audience loved it. I really do believe this is our ‘Best’ pantomime ever and our audiences are growing year on year as they come back to see their favourites and our all-star cast.”

Based on the classic fairytale, Cinderella tells the much-loved story of a pretty young girl kept captive by her wicked ugly step-sisters. When Cinders is invited to a magnificent ball at the palace, her two fiendish siblings forbid her to attend.

With a wave of a magic wand, her very own fairy godmother appears to save the day and she is transformed into a beautiful princess. After a magical evening dancing endlessly with Prince Charming, midnight approaches and poor Cinders has to depart before the spell is broken.

With a single glass slipper left behind, will Prince Charming be able to find his princess? Will Cinders escape the clutches of her ugly step-sisters and live happily ever after?

With a live orchestra, real Shetland ponies, lavish sets and exquisite costumes, the audience is in for a real treat this Christmas!

Cinderella runs at The Epstein Theatre until 3rd January 2016 so book your tickets now for the most enchanting panto in the land. We do hope to see you there (oh yes we do)!

Or via TicketQuarter: Call 0844 8000 410, visit www.ticketquarter.co.uk or book in person at TicketQuarter, Queen Square, Liverpool.