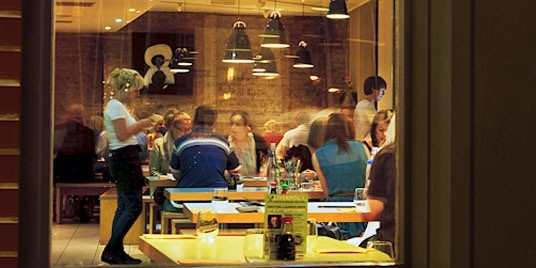 If you do one thing this weekend, visit HOST

HOST – one of my favourite eating spots in my favourite part of the city. When I was asked last month if I’d like to review their new menu, it was a bit of a given. I’d been to Host many times before, but often it was a light bite or a rushed lunch; and I was looking forward to taking my time, soaking up the atmosphere and really enjoying everything that’s on offer.

“We wanted HOST’s Asian-fusion menus to offer the best in Thai, Chinese and Japanese-inspired casual dining cuisines from day one, but we’ve added an extra focus on small plates this summer.”

I quickly and excitedly made Friday night reservations for me and my girlfriends and along we went to Liverpool’s glorious Georgian Quarter. HOST is located on Hope Street, voted Best Street in the UK and Ireland by The Academy of Urbanism in 2013 – and it’s not hard to see why. HOST provides stunning views of what is arguably the most beautiful part of the city, steeped in history and overlooking the magnificent Anglican Cathedral.

But on stepping inside HOST, it is as if you have been transported to downtown Tokyo or New York. The canteen-style dining arrangement with long shared tables, bench seating, exposed brick, open kitchen and minimalist décor make for a cool, urban feel – but it is in no way pretentious or off-putting. 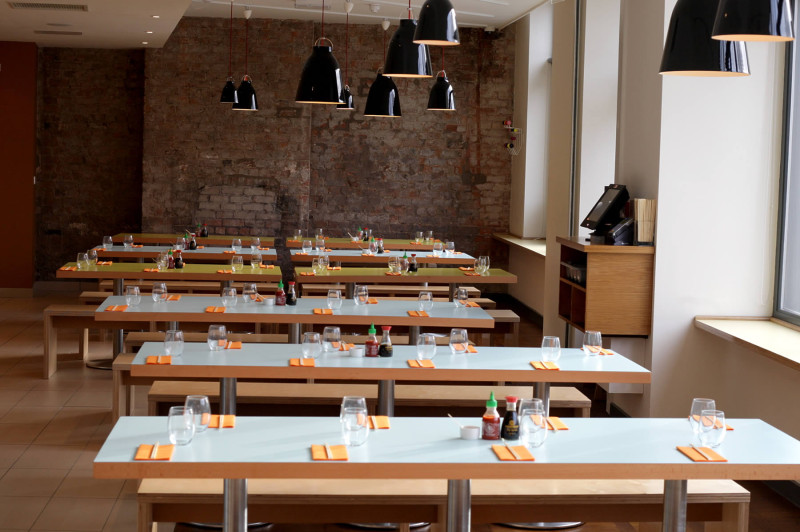 As we were greeted, my eye was immediately drawn to the summer cocktail menu. A list of unusual and exotic-sounding beverages laced with sake and gin with all the flavours of the East – lychee, passion fruit, hibiscus, lime… Well, one little one wouldn’t hurt.

The restaurant was abuzz with people of all ages and circumstance – families, students, groups of friends and couples all adding to the welcoming melee as we made our way to our table. I have always loved that about Host. You could be forgiven for thinking that the SOHO-inspired vibe might attract hipsters and food snobs, but somehow it never has. Over the years, HOST have managed to maintain the status quo of a varied and diverse clientèle, something that is rare and inviting.

We were seated and handed our menus. Now we were tasked with the almost impossible – to choose just one dish from HOSTs extensive Asian-fusion menu.

Since travelling the Far East eight years ago, my love of Asian-inspired cuisine has grown and HOSTs is about the best I have tasted. Invoking memories of fresh and delicious street food from Bangkok – it is simple food prepared with great skill and it NEVER disappoints.

The small plates include such delights as Thai lamb Massaman baked dumplings, chicken satay with peanut sauce, deep fried ham hock with caramel and chilli vinegar and of course, a firm favourite, the duck and watermelon salad.

Big plates tempted us with Indonesian beef Rendang curry, Vietnamese confit duck leg and a staple on HOST’s ever-evolving menu, chicken Katsu curry – which I can say from experience, is a joy!

To start, I opted for butternut squash and pine nut gyozas with chilli and tamarind chutney. They arrived quickly and were piping hot, tiny little morsels of deliciousness, spiced but not spicy and the texture from the pine nuts was a treat. 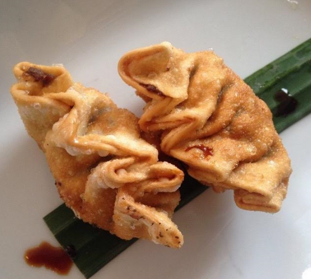 Next, after much deliberation, I finally plumped for black pepper glazed rib-eye steak with Asian greens and black sesame and it was sensational. The steak, cooked medium-rare, was tantalisingly tender with a delicate heat from the black pepper. The Asian greens were a perfect, light accompaniment and made sure that the steak was, as it should be, the star of the show. The black sesame made for a satisfyingly savoury dish – and I certainly savoured every mouthful.

My friends were brought their orders of green chicken coconut curry (cooked mild, as requested) and crisp fried fillet of sea bass with tender stem broccoli and soy beans in Vietnamese hot & sour sauce. The three of us squeaked with delight, swapping and sharing, oohing and ah-ing our way through the evening.

As a self-confessed dessert-aholic with a penchant for anything sweet, my eyes lit up when we were finally shown the dessert menu. Spiced carrot cake with mango sorbet, orange and cardamom brulee with orange shortbread, and marshmallow chocolate brownie with peanut butter ice cream and toffee sauce… this is the stuff that dessert dreams are made of.

Alas, if puddings aren’t your thing, you might be tempted to wash dinner down with a dessert cocktail like the Peanut Butter Bomb – Woods navy rum, Makers Mark, peanut butter syrup, ginger ale, gomme. Not for the fainthearted!

At long last though and after ten long minutes of inner-turmoil, I had to admit defeat. After 2 courses, and a helping of my friends’ dinners, where would I put cake? So, I decided to sip a sake cocktail to end the evening – it seemed appropriate. I ordered signature cocktail Hostea, a delicious blend of Umeshu plum sake, ace pomegranate tea, gran marnier and fresh orange served over ice – and quite lovely it was too. I’ll be back for cake.

HOST cater for a range of dietary requirements, including vegan, gluten free and dairy free – there really is something for everyone.  It has become a haven for travel writers, the city’s cognoscenti and well-heeled theatrical celebs as well as a magnet for discerning cocktail thrill seekers by day and night – I defy anybody visiting HOST to not want to return immediately.

For more information or to book, visit www.ho-st.co.uk/