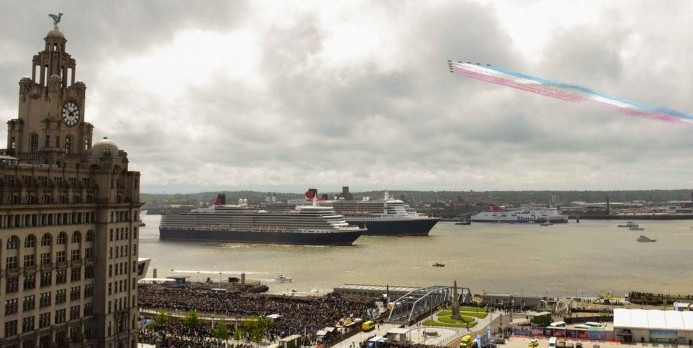 Liverpool has scooped the ‘Destination of the Year’ prize at the prestigious Seatrade Cruise Awards.

It beat off competition from the Baltic and the Guadeloupe Islands at a ceremony in Hamburg for a prize awarded to an area that “has made significant strides in promoting cruise-tourism over the past 12 months”. Previous winners include Singapore and Copenhagen.

It comes just months after Liverpool hosted the three Cunard Queens as part of the 175th anniversary of the shipping line, drawing 1.2 million people to the Liverpool, Wirral and Sefton waterfronts and boosting the economy by £32.9 million.

“What a year this is turning out to be for Liverpool Cruise Terminal!

“We all know that the city is a great destination for cruises and we get amazing feedback from passengers, but it is really important that we spread the message around the world that Liverpool is a wonderful place to visit on a liner.

“These awards show that we are making a real impact in the industry, which is vital if we are to attract more vessels to the city.”

It is the latest in a growing number of awards for Liverpool Cruise Terminal, which has won the Cruise Critic ‘Port of Call of the Year’ prize for the last two years. In addition, Cruise Manager Angie Redhead was recently named WISTA (Women in Shipping and Trade) International Personality of the Year and has been appointed Chair of Cruise Britain, the organisation which works to promote Britain as a world-class cruise destination.

“We are delighted to be named as winner of this prestigious award which is incredible recognition for Liverpool.

“The meeting of the Three Queens in May 2015 was not only a highlight for Liverpool and Cunard, but also raised the profile of cruise passenger shipping around the world due to the global media coverage it received.

“We make every cruise line and every cruise passenger feel special when they call to Liverpool with enhancements such as music, street theatre, firework farewells and aligning cruise calls with our major events programme.

“The award will only help contribute towards the growth of cruise shipping in Liverpool as more and more cruise lines hear that we are one of the best ports in Northern Europe.”

Liverpool Cruise Terminal has had a record breaking 2015 with 54 cruise ships berthing – bringing with them more than 80,000 international visitors to the city.

Next year, Disney Cruise Line will be bringing its Disney Magic ship to the city for the first time, with Liverpool one of just two English destinations it will sail in to.