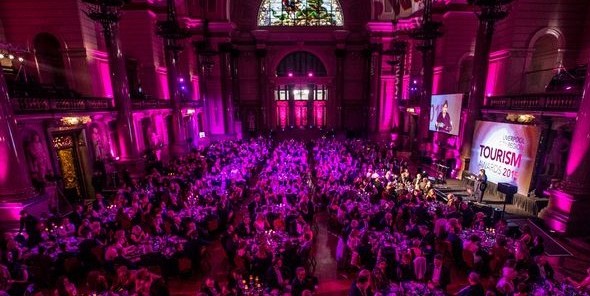 The best and brightest of Liverpool’s tourism industry were once again celebrated at the annual City Region Tourism Awards held at St George’s Hall, last night (Thurs May 21).

The event rewarded Liverpool City Region’s increasingly vibrant tourism offer with categories for both organisations and individuals. In total, there were 19 awards up for grabs.

Hilary Oxlade was the stand-out winner on the night, scooping the award for Outstanding Contribution to Tourism. Hilary has operated as a tour guide in Liverpool for the past 35 years and is a specialist in a wide range of scouse subjects including The Beatles and Liverpool’s Cathedrals.  The coveted People’s Choice award was won by the Cavern Club.

Guests were treated to a complimentary cocktail on arrival by the fast-growing independent business, Liverpool Gin, and a luxury three course meal courtesy of the Yacht Club. All-female group, Siren String Quartet, ended the night in style by performing a number of up tempo modern classics.

“We have had an amazing response to this year’s awards with triple the number of entries compared to last year and a sold-out audience for tonight. These awards really underline the quality of our visitor economy businesses and the passion felt right across the region for our magnificent destination.

“The strong cache of award entries this year reflects the variety and vibrancy of the visitor economy, which continues to set the bar for economic growth, for innovation and for national accolades across the region.”

“There remains significant opportunity to grow our visitor economy, to create even more valuable jobs and careers and to ensure that we have a sustainable future as a world class destination of choice for leisure and business travellers.

“We want to see another 800,000 visitors per annum enjoy what you have to offer and we want to see another 23,000 people employed in the visitor economy in the next 10 years. That’s the scale of the opportunity from driving the city region further up the business and leisure visitor league table.”

The event was hosted by comedian and actor Neil Fitzmaurice. This year’s headline sponsor was WebTicketManager and the full list of winners from the evening can be found below.

Tourism Marketing Campaign of the Year – Sponsored by Influential

Serviced Apartment of the Year – Sponsored by Cleanall

Tourism Event of the Year – Sponsored by Liverpool ONE

Tourism Experience of the Year – Sponsored by Liverpool Hoteliers Association

Bar of the Year – Sponsored by Marketing Liverpool

Small Visitor Attraction of the Year – Sponsored by Wild Thang

The Foresight Centre, University of Liverpool

Guest Accommodation of the Year – Sponsored by Tamzyn Angela

Tourism Ambassador of the Year – Sponsored by WebTicketManager

Performance Venue of the Year – Sponsored by MSP

Best Newcomer to the Visitor Economy – Sponsored by Eventful

Hotel of the Year – Sponsored by Liverpool John Lennon Airport

The Three Queens are nearly here!