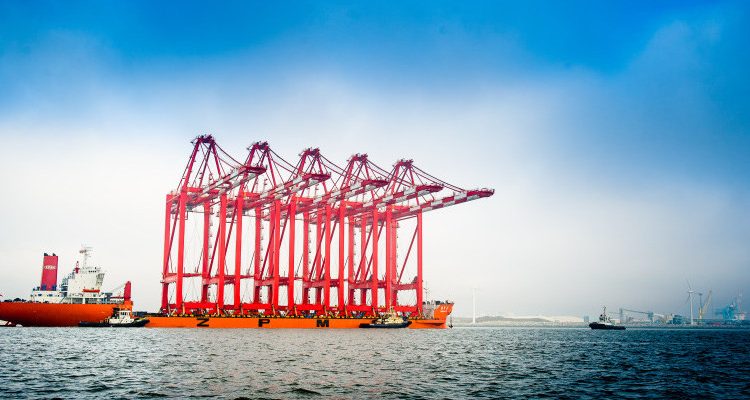 A giant vessel bearing five ‘megamax’ quayside cranes sailed up the River Mersey yesterday, destined for the new Liverpool2 container terminal, completing the final stage of its voyage from China. 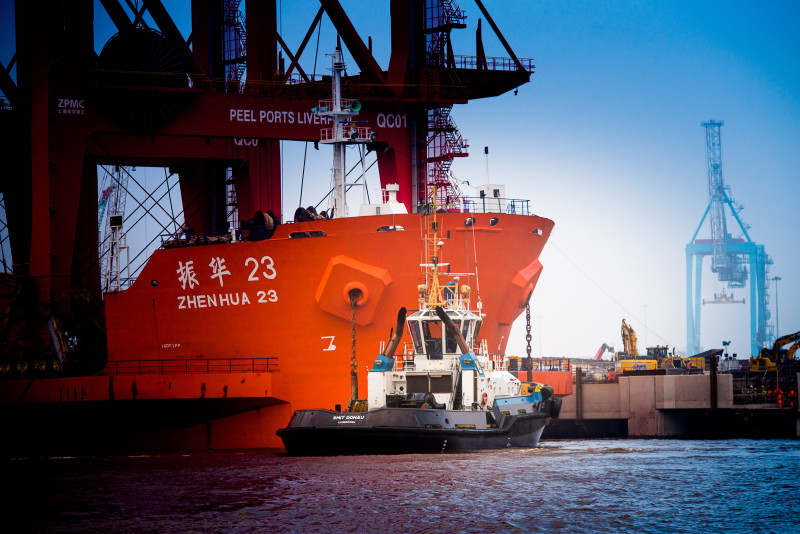 The new cranes mark the start of a new era for the Port of Liverpool as the most visible element of Peel Port’s £300m investment to create the UK’s most centrally located deep water container terminal.

Setting off from Shanghai in August the cranes travelled past south-east Asia, India, the Arabian Peninsula and Africa via the Cape of Good Hope en route to Liverpool in a journey of over 30,000km (18,000 miles, 16,400nm).

The super-structures were produced by Chinese company, Zhenhua Heavy Industries Co (ZPMC), the largest heavy duty equipment manufacturer in the world, as part of a contract with Peel Ports worth more than £100m. A total of eight ship-to-shore megamax cranes and 22 cantilever rail-mounted gantry cranes are being supplied to Peel Ports as part of the company’s £300 million investment programme to expand and develop the Port of Liverpool.

Each crane measures 92 metres high to the top of the frame, approximately the same as Liverpool’s iconic Royal Liver Building, and 132 metres high when the boom is raised. Each crane weighs around 1,600 tonnes.

Liverpool2 is the UK’s largest transatlantic deep-sea port and container terminal and the investment in facilities will allow it to accommodate the majority of the world’s current container fleet, including vessels up to 20,000 TEU (twenty-foot equivalent units) or two 13,500 TEU vessels simultaneously.

“This is a truly unique day in Liverpool’s long maritime history. The spectacular sight of these cranes sailing up the Mersey to the L2 site is unprecedented. Our investment in leading-edge infrastructure and technology will allow Liverpool to offer the quickest and most cost-effective route to market, not just for goods destined for the north of England but also for Scotland, Ireland, North Wales, opening up a new logistics routes estimated at four million TEU every year and increasing potential import and export trade.”

The cranes will have the ability to operate at speeds in excess of 30 moves per hour and will facilitate an anticipated 1,500 moves in each tidal window. They will be capable of twin-pick and outreach of 24 containers up to 10 high on deck, and safe working loads of up to 85 tonnes. They will also have the ability to operate in wind speeds of up to 55 miles per hour (88kmph).

The fleet of STS and CRMG cranes is supported by a multi-million pound investment in state-of-the-art quayside facilities and support technology, including a fully-integrated Navis N4 terminal operating system, AutoGate and ABB equipment controls. The technology will increase the security and efficiency of terminal transactions whilst reduce costs and minimising waiting times for hauliers

The combination of infrastructure and technology will reduce the time taken to transfer containers from port to road or rail, helping the Port of Liverpool to achieve targets of 65% of haulage turned round in 30 minutes and 95% of haulage turned in 60 minutes.

Peel Ports’ investment in Liverpool2 will strengthen the growing infrastructure of the Northern Powerhouse to create a gateway into the north of the country which Chancellor George Osbourne referred to on his recent visit to China, citing the area’s important trading links and outstanding pedigree in food and drink, fashion, automotive, and aerospace.

Twopence to embark on new journey across North West and Wales