IT services consultancy adept4 has started the New Year with three new additions to its growing team and the expansion of its headquarters. 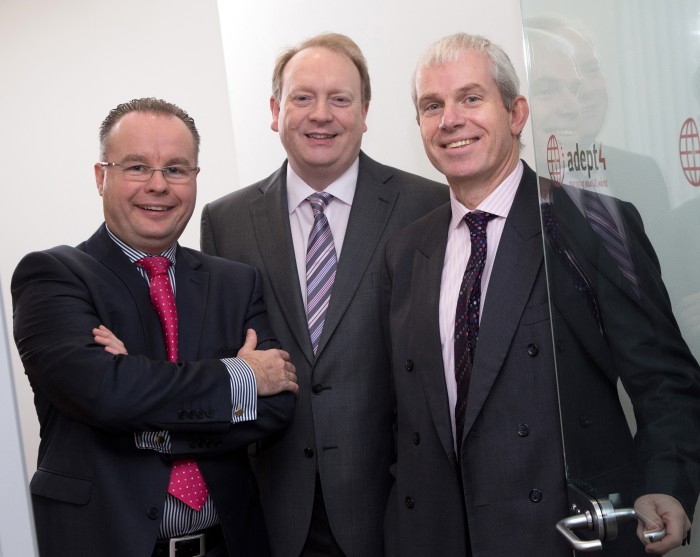 Following a successful 2014 across offices in Daresbury, Aberdeen and London, the company has continued to strengthen its team with a trio of appointments following a series of project wins.

Cheryl Wood, from Altrincham, will join adept4 as a central project manager. Cheryl joins from ANS Group, where she worked for six years and has extensive experience in overseeing project management offices and managing field consultants.

Adrian Beck, from Sheffield, joins from BT and will work on adept4’s Support Desk. He will be joined by Gabor Balogh who is originally from Hungary. Gabor formerly worked at Unisys-Microsoft before joining adept4’s Support Desk. In their roles on the Support Desk, Adrian and Gabor will provide exemplary customer service as a point of contact for clients, dealing with customer enquiries.

“In the ever-changing and evolving IT landscape we need to ensure that we continue to invest in people, who remain at the core of what we do. 2014 was a great year for adept4, thanks in the most part to the skilled team we’ve nurtured, based across the company’s offices.

“This series of appointments are part of long-term plans to strengthen and grow the team and support the planned growth trajectory for adept4 in 2015. Identifying and retaining skilled individuals in an increasingly fluid market is no mean feat and we pride ourselves on ensuring we reward and invest in our staff and continue to attract and retain those of the highest calibre.”

The new appointments and contract wins have called for a renovation and expansion of the business’s office as it anticipates continued growth throughout 2015. New, state-of-the-art meeting spaces will be installed at the Daresbury office.

adept4 enjoyed a strong 2014, with a number of new contracts putting the business on track to achieve its goal of year on year growth of 30 per cent for the last four years including. Key wins included a seven-figure deal to provide full IT and telephony services to North West-based healthcare provider Baywater Healthcare, delivering 24 hour specialist support to the company’s staff of 150 across 11 sites. The company, which has seen its team more than double in the last two years, also became an accredited Living Wage employer earlier in 2014.